Faster and possible 3D-optical control of particles shown in Japan 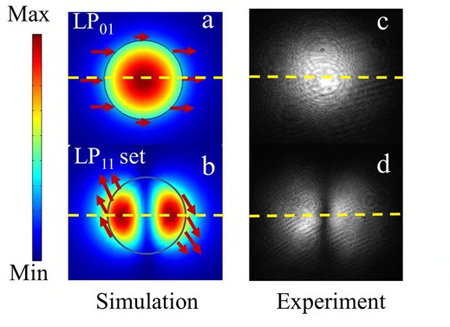 Shifting: shapes of light in the fundamental mode (above) and higher order mode (below).

Scientists at the Okinawa Institute of Science and Technology Graduate University (OIST) have demonstrated what they are calling a “more robust” method for controlling single, micron-sized particles with light.

Optical trapping and manipulation of particles using optical micro or nanofibers has the potential to help deliver drugs to specific locations, such as inside a target cell, measure the interaction forces between cell components, and aid in quantum physics research using “cold” atoms.

Passing light along optical microfibers or nanofibers to manipulate particles has gained popularity in the past decade and has an array of promising applications in physics and biology. Most research has focused on using this technique with the basic profile of light, known as the fundamental mode.

The researchers in the OIST Light-Matter Interactions Unit have now demonstrated that changing the profile of the light distribution into “higher order modes” provides a stronger optical force, which trap and propel tiny polystyrene beads along a microfiber much faster than if they use the fundamental mode. Their findings were recently published in Scientific Reports.

Dr. Viet Giang Truong, a physicist at OIST and paper co-author, commented, “While it was theoretically proposed that higher order modes would produce stronger forces, this is the first time, to our knowledge, that three-dimensional particle manipulation has been experimentally demonstrated.”

Usually, in the fundamental mode, the energy is most intense at the center and gradually fades towards the edge of the beam. Any other light shape is called a higher order mode. For example, the energy pattern can look like a doughnut, with most of the energy contained in a ring, and none in the hole or middle. Higher order modes can be achieved by shining the light through certain crystals.

A 3µm polystyrene bead is propelled along a fiber by light in fundamental mode (l) and higher order mode (r).

To control particles with optical microfibers submerged in water, the OIST scientists guide a laser beam through the fiber. The fiber itself starts with a well-defined diameter at each end, but narrows dramatically in the middle “waist” region. As the light travels through the fiber, it cannot fit inside the extremely thin waist, so it spreads out creating an evanescent field around the fiber. This light field can trap particles close to the fiber surface, allowing scientists to control their position and movement. The light propels the particle in the direction the light is moving.

OIST researchers compared how particles react to light in the fundamental mode versus higher order modes, which create larger evanescent fields. They observed that when higher order modes were used, the particles moved up to eight times faster along the microfiber.

An increase in speed was expected. Part of the increase is likely due to microfluidic dynamics, explained Aili Maimaiti, lead paper author, and a PhD student from University College Cork, Ireland who is conducting his doctoral research at OIST under the supervision of Prof. Síle Nic Chormaic. As the particle picks up speed, it lifts slightly away from the fiber, reducing drag and allowing it to move even faster.

One of the keys to making the experiment successful was redesigning the shape of the glass microfiber so that light does not leak out of it before reaching the waist region where the experiments are conducted. The microfiber starts out at 80 microns, and then tapers down to 2 microns at the waist. Researchers painstakingly create this tapered section by positioning the fiber over a flame and, as the glass heats up, gradually stretching it out until the central region reaches the desired thinness.

“The beauty of ultrathin optical fibers is that they are a very non-invasive tool allowing us to probe many different physical systems while only affecting specific parameters that we choose,” said Prof. Síle Nic Chormaic, who heads the OIST Light-Matter Interactions Unit. “While this work focusses on trapping micron-sized particles using higher order light modes in optical microfibers, we can use similar techniques at the atomic level for creating some of the building blocks in quantum networks.”

The OIST-generated video, below, shows a polystyrene particle being propelled along a microfibre by light, first in the fundamental mode, then in a higher order mode. It is easy to see how much faster the particle zips along in the higher order mode.