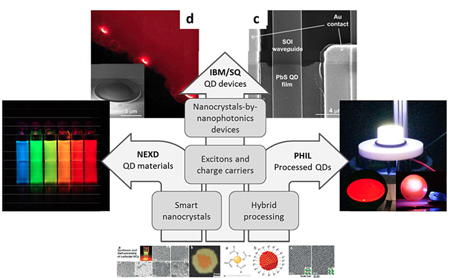 Diverse: the overall scope of the Phonsi program is broad.

Ghent University in Belgium is leading a European training project into quantum dots, based on a consortium called Phonsi, which combines several research institutes, along with IBM and startup Single Quantum and world-leading expertise in synthesis, characterization and integration of these nanocrystals.

The project aims to train a select group of researchers to a high level of expertise in all aspects of nanocrystal science and it is has the ambition to “gain new insights in synthesis, characterization, processing and integration of nanocrystals into devices that allow operations at the single photon level.”

Quantum dots are small pieces of semiconductor nanocrystal materials, which can be used to emit and detect light with highly specific characteristics, including at the single-photon level. Recently, significant growth in demand for these relatively novel optical nanomaterials is driving the next steps in the evolution of light based-technologies.

Zeger Hens, Phonsi project coordinator, who also works at UGent’s Department of Inorganic and Physical Chemistry, told optics.org, ”We are now looking for a further 10 or so PhD students to reach a total of 16. We will interview the next batch between now and the deadline, which is in the early summer, 2015.”

Hens described the current state of QD research and development as being “in transition” between the laboratory and the marketplace. “We have recently seen the emergence of early QD-based displays. Researchers in this field need to develop knowledge and possess a research attitude that enables them (to cope with complex, multidisciplinary problems and analyze these in terms of their chemical, physical and technological aspects.

”Candidates will also have to combine a wide knowledge of materials, concepts and disciplines to meet the challenges raised bymarket-driven research. If Europe wants to lead the future developments in photonics-by-nanomaterials, training of researchers with these skills and abilities is a must.”

The Phonsi approach intends to achieve these training goals with a research program on nanophotonics-by-nanocrystals, where colloidal QDs are combined with CMOS compatible platforms for integrated photonics such as silicon-on-insulator and Si3N4 to develop integrated nanophotonic devices. The project is supported by partner organizations, including Cardiff University, Philips, Nexdot, Flamac and IEMN-ISEN.

Matthew Peach is a contributing editor to optcs.org.