As the firm pushes the efficiency of its long-standing CdTe technology, it is simultaneously starting to ramp TetraSun's silicon cells. 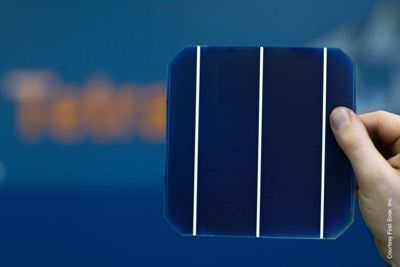 It is hoped that the bifacial design of the crystalline silicon cells that were initially developed by California start-up TetraSun – and acquired by First Solar in 2013 - will provide a winning combination of high efficiency and low-cost production.

First Solar’s CEO Jim Hughes told an investor call to discuss the US firm’s latest financial results that TetraSun module production had recently started up at its manufacturing lines in Malaysia.

“We are encouraged by the performance of the technology, which is being produced with initial cell efficiencies of 20.5 per cent,” Hughes said. “Our expected capacity for 2015 is approximately 50 megawatts and we will ramp future production levels based on market demand.”

When it acquired TetraSun, First Solar indicated that the technology would be best suited to rooftop PV applications, a sector of the market where its lower-efficiency CdTe modules have had little impact.

However, Hughes also highlighted the major strides made by the company’s research and development team over the past couple of years in raising the efficiency of CdTe cells and modules.

Lab innovation
In the closing quarter of 2014, the average conversion efficiency of the CdTe modules made by First Solar stood at 14.4 per cent. But since the start of 2015, Hughes said, four of the company’s production lines had improved that figure to 15.8 per cent, by implementing some of the innovations that the company’s research team has devised as it has raised CdTe cell efficiency in the laboratory to 21.5 per cent.

By the end of this year, all of First Solar’s production lines should be producing modules at close to the 15.8 per cent efficiency figure.

The progress on CdTe could see that technology encroach on potential TetraSun targets, but Hughes maintained that he had “high hopes” for the advanced silicon cells, and that ultimately both technologies should have a role to play in the various PV markets.

Of the TetraSun silicon modules, the CEO said: “We have made a specific commitment to TetraSun that will take us to [slightly more than] 100 megawatts of levelized production when we get it fully ramped up.”

But for the time being, he stressed, the focus was on turning the silicon technology into a “real” product. “We’ve got to get through the normal ramp, get the modules certified in the marketplace, get a chance with real customers to see what the product looks like.”

India; SunPower hook-up
Hughes also highlighted the emergence of India as a key PV market. Analysts are predicting a sharp rise in demand from the country starting this year, following the Indian government’s announcement that it wants to deploy 100 GW of solar power by the end of the decade.

First Solar has responded to that with a broad commitment to build 5 GW of PV generating capacity in the country, although Hughes pointed out that with lots of action still required in India, details at this point are scant.

“It’s a rapidly changing, rapidly developing market,” he told investors. “We believe that the opportunity is real and significant. But it’s way too early to talk about any kind of specifics.”

For the full fiscal year 2014, First Solar delivered sales of $3.39 billion, up slightly from $3.31 billion in fiscal 2013. The company’s net income rose more sharply, to just under $400 million over the same period.

First Solar’s stock price, which jumped around 10 per cent in value following news that it would form a “YieldCo” joint venture to generate steady dividend income from solar energy deployments with fellow PV giant SunPower, rose in value by another 5 per cent in early trading after the financial update.