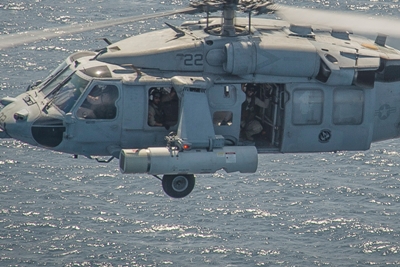 US defense contractor Northrop Grumman says it has won a contract from the US Navy for continued production of its airborne laser mine detection system (ALMDS).

According to the firm, it will now make an additional five pod subsystems for ALMDS, and provide support equipment, spares, and technical assistance. Northrop’s photonics-focused subsidiary Cutting Edge Optronics makes the high-power laser transmitters that are at the heart of the system.

“The ALMDS is mounted on an MH-60S helicopter,” says Northrop. “Flying over sea lanes, it finds and geolocates mine-like objects with its pulsed laser light and streak tube receivers by imaging, in 3-D, day or night, the near-surface of the ocean.”

Northrop says it has already delivered 12 ALMDS pods to the US Navy as part of an initial production lot, while in February 2012 the Japan Maritime Self Defense Force ordered four of the pods. They are currently undergoing integration and test aboard the EH-101 helicopter.

The US Navy has also worked with BAE Systems on a lidar-based minesweeper, awarding Northrop’s rival a $20 million development contract in April 2013 for a prototype system based around a fast-scanning laser, 3D imaging camera, and target recognition algorithms to locate and classify surface and underwater threats in near-shore waters.

Fifth Fleet deployment
The Northrop Grumman system transmits a fan-shaped beam of laser light towards the sea, sweeping at the speed of the aircraft carrying the systems in a “push-broom” manner. It uses four cameras along with a target recognition algorithm to identify and store three-dimensional images of any suspicious-looking objects.

The ALMDS system forms part of the mine countermeasures package on the US Navy’s new Littoral Combat Ship.

In August 2014, the US Navy said that it had deployed ALMDS for the first time with the Fifth Fleet in the Middle East, on board an MH-60S Sea Hawk helicopter. Previously airborne mine countermeasures were flown on board MH-53E Sea Dragons – the US Navy’s largest helicopters.

"It's a laser-driven system that works like radar," said Lt. Cmdr. Theodore Lemerande, the US Navy officer in charge of the “Laser Hawks”, at the time of the maiden deployment.

"It beams a laser down into the water and picks up reflections from anything it bounces off of. The system then registers the returned information and uses that data to produce a video image in order for technicians on the ground to determine what the object is."