Super-resolution microscope at UK site now said to be fully operational, while new ultrafast infrared laser is close to completion. 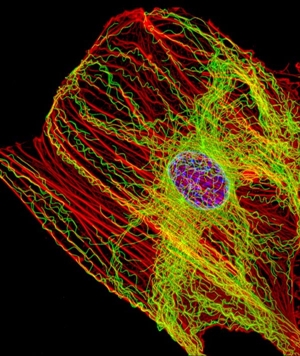 The first to become fully operational is a £0.9 million super-resolution microscope system based on the stimulated emission depletion (STED) technique. It can be used to study objects just a few tens of nanometers wide – much smaller than a cell and beyond the traditional realm of optical microscopy as defined by Ernst Abbe’s classical diffraction limit.

The new equipment forms part of the “OCTOPUS” suite of microscopy kit at the CLF, which already houses related “PALM/STORM” super-resolution systems. They will soon be complemented by another new tool in the form of a £1 million synchronized ultrafast infrared laser system known as “LIFEtime”. It will be able to monitor biomolecular responses to light on the order of picoseconds.

Over the past 15 years, Abbe’s supposed limit has been broken by a variety of techniques, culminating in the award of the Nobel prize for chemistry last year to three of the scientists to have played a key role in the various developments.

Among them was Stefan Hell, who came up with the STED technique. Although excellent at resolving details of structures just a few nanometers in size – for example showing “firing” of neurons in mouse brains – it does have some drawbacks, notably its reliance on a high photon flux.

STED: some drawbacks
Another of the 2014 chemistry Nobel laureates, Eric Betzig, said at last week’s BiOS conference – part of Photonics West – that such high-intensity light tended to kill the very cells that the STED technique had been designed to image.

“Life evolved at 0.1 watts per square centimetre,” he pointed out, saying that tools relying on very high photon flux were not compatible with live cell imaging, and that a more recently developed and lower-power technology - structured illumination, or lattice light-sheet microscopy – provides a better option.

The STED and LIFEtime installations at the CLF were both backed with funds from the UK’s Biotechnology and Biological Sciences Research Council (BBSRC), as part of a wider £10 million round of investment in both optical and electron microscopy equipment.

The UK Science and Technologies Facilities Council (STFC), which hosts the CLF, pointed out that one of the key challenges to arise from super-resolution imaging was the huge amount of digital data generated, and the need to collate, integrate and compare it with all the other information produced by all the other OCTOPUS tools.

“STFC’s supercomputing infrastructure and expertise are being harnessed to achieve this, ensuring that datasets from the STED microscope are collected fast and efficiently and made available for interrogation by research teams using the instrument to push beyond the boundaries of current biological and biotechnological knowledge,” it said.

Actin filaments and photosensitive proteins
Among the first to get their hands on the new STED kit are John Runions and his research group at Oxford Brookes University. They will use it to study plant cells – and specifically the interaction between the actin cytoskeleton and the cell wall. Runions said:

"STED provides the high resolving power we need in order to image very fine, growing actin filaments. It allows us to image detail that conventional microscopes simply would not allow us to."

Commenting on the capability of the “LIFEtime” system, due to be fully operational “shortly”, Tony Parker from the CLF added: “We’re combining complementary data obtained from crystal samples by the Diamond Light Source, based next door, and using this to develop computer code that provides a structural identification tool for solution studies - as real biology works in our cells in our lifetime."

Researcher Steve Meech from the University of East Anglia is set to use LIFEtime to study the dynamics of photosensitive proteins. He said:

“We need extremely sensitive measurements as we’re looking for small changes and want to track responses from the laser’s first interaction with the protein right through to milliseconds afterwards. The LIFEtime apparatus with its high stability and high repetition rate will allow us to record these changes and help us take a significant step forward in understanding protein function.”