IPG up again after another record year

Revenue grows 19% in 2014 overall as demand for fiber lasers shows no sign of abating. 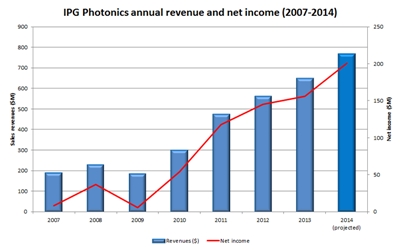 Up, up and away: IPG sales and profit (click to enlarge)

Fiber laser market leader IPG Photonics has confirmed another record-breaking financial year, with sales and net income both up sharply on the prior year.

The Oxford, Massachusetts, company’s stock rose in value to register another record high after CEO Valentin Gapontsev confirmed a preliminary announcement that sales grew 19 per cent in fiscal 2014, to just under $770 million.

Investors would have been particularly pleased to see IPG’s profit margins improve yet again, generating the firm a pre-tax income of $284.5 million in fiscal 2014, up 30 per cent on the figure it posted for 2013.

Diode production up sharply
“We continued to expand our breadth of applications, made great strides in penetrating cutting OEMs, and improved our competitive position in the automotive market," said Gapontsev. "In addition, the growth we anticipated in metal-based 3D printing at the beginning of the year materialized.”

Despite continuing to cut the prices of its lasers, IPG has been able to further improve its profitability, and is generating far more cash than its more diversified rivals in the photonics sector.

That is due in no small measure to its internal production of high-power laser diodes, the devices that sit at the heart of the fiber lasers. According to IPG’s most recent investor presentation, in 2014 diode production was scaled up dramatically – reaching around 3.2 million chips. In 2013 the figure was only 1.8 million, while as recently as 2010 it stood at 0.7 million.

Record high
With the company’s stock price trading at just over $90 on the Nasdaq exchange shortly after the earnings release, IPG now commands a market capitalization of more than $4.6 billion.

Gapontsev said that in the closing quarter of 2014, strong demand from the US automotive industry was a key factor as sales of high-power lasers jumped 32 per cent on the year-ago quarter. Remarkably, sales of medium-power lasers grew at an even faster rate, up 58 per cent thanks to demand for fine-processing applications.

Orders continue to flood in, with the CEO highlighting a backlog of $321 million – up 20 per cent on this time last year. For the current quarter, he is predicting that sales will come in somewhere between $195 million and $205 million, in what is typically a seasonally weaker period because of the new year in China.