With restructuring over, the company saw organic revenue growth for the first time since 2010. 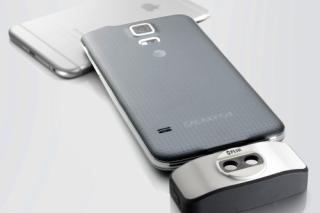 The dongle-style FLIR ONE

Increased revenues across many of its markets boosted quarterly and full-year results for FLIR, making for what CEO Andy Teich described as a significant year for the company in the thermal imaging industry.

Full-year figures indicated a two percent rise in revenue to $1.53 billion, while net income for 2014 increased by 13 percent to $200.3 million.

"For the year we returned to positive organic revenue growth for the first time since 2010, while increasing our earnings per share by 14 percent over 2013," Teich told analysts. "We were very successful in realigning our operations to better serve our existing and future customers, while also reducing our operating costs."

The largest increase in quarterly revenue came in the company's security products segment, which rose by 35 percent to $56.4 million, as part of a 27 percent increase for the full year. "We look forward to introducing some very innovative new products during 2015 that will create further momentum for the security segment," commented Teich, who expects it to remain the fastest growing part of the company's portfolio.

Currency exchange factors played a part in the overall picture, in particular impacting FLIR's maritime segment where more than 60 percent of sales were in currencies other than US dollars. The strength of the currency contributed to a fall of six percent in revenue year-on-year from that particular sector, the only one to decline.

Although not mentioned by name, FLIR's legal victory over Raytheon in a long-running dispute about trade secrets contributed to a rise in corporate administrative expenses of 29 percent; CFO Tony Trunzo commented that concluded litigation matters should now have no further material impact.

Alongside the earnings announcement, the company approved a new share repurchase program aiming to acquire up to 15 million shares over the next two years, representing approximately eleven percent of FLIR outstanding common stock.

FLIR ONE: the next generation
FLIR ONE, which brings thermal imaging capability to individual consumers via an attachment to mobile phones, continues to be a focus of the company's attention, with the latest iteration of the device bringing a new smaller form-factor and attaching to a phone as a dongle rather than a full-size case.

The company is keeping its options open for future designs, but a dongle version should bring improved compatibility with both iOS and Android phones, boosting market penetration of the platform beyond its current level. Shipments will begin during the first half of 2015.

"The reality here is that FLIR ONE was launched to drive awareness in the market and find new applications," Teich said. "It's performed very well in that regard. The revenue expectations for the second generation FLIR ONE product are meaningfully higher than we had with the first generation."

FLIR's other significant 2014 introduction, the Lepton low-cost thermal imaging core, will see further utilization across most of the company's market segments according to the CEO, who predicted a relative increase in launches around the core in 2015 compared to the previous year.

Business acquisitions are now also on the company's agenda. "We have finished the strategic portfolio review and identified the areas that we feel offer the strongest growth for the business," Teich said. "M&A will become an important part of our strategy to augment those growth areas in the next year or two."

• The markets liked what they heard, with FLIR shares rising by 4 percent immediately after the results announcement and continuing upwards.