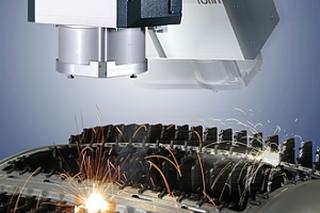 Rofin-Sinar saw its net sales rise by one percent year-on-year in the first quarter of fiscal 2015, as currency exchange rates held back the company's progress.

Net sales for Q1 totaled $122.4 million compared to the $121.2 million reported for the equivalent quarter twelve months ago, and fell outside the company's prior guidance.

Net income and earnings-per-share both improved under the same comparison: income rose to $6.2 million from $2.2 million, with EPS reaching $0.22 compared to $0.08 for the equivalent periods.

With some 70 percent of Rofin's revenues being in currencies other than US dollars, CEO Günther Braun noted that the results were damaged by exchange rate volatility. The strength of the dollar against the euro had accounted for a decrease of $7.1 million to the quarterly net sales number, he said.

Sales to the automotive sector were among the highlights; Braun described it as having been one of the strongest quarters in that market for the company in a decade, and indicated that Rofin is working on a larger project with a Tier 1 supplier. Rofin's machine tool, medical and electronics businesses all remained solid, while the semiconductor sector softened and performed below expectations.

Braun pointed to the solar sector as being another bright spot. "The highlight of the quarter was the recovery of the solar business, especially in China," he told analysts. "Net sales in the micro- and marking sector increased by three percent to $57.6 million compared to the first quarter of fiscal 2014, representing 47 percent of total quarterly sales."

Growth in fiber-lasers
High-power fiber-lasers continue to play a large part in the company's plans, with sales of such products rising by approximately nine percent sequentially and 44 percent year-on-year, before exchange rate impact.

"We continue to see increased interest from worldwide OEM customers for our third generation of high-power fiber lasers, and will launch a number of next-generation products over the coming two quarters," he said. "This should support further growth in revenue and profitability."

The second quarter of fiscal 2015 should then see a shipment mix of high-power fiber lasers split approximately down the middle: 50 percent previous generation and 50 percent new, which Braun noted will mean "further cost reduction in the existing fiber-laser product line, to be able to be more competitive in the market."

Looking ahead, new ultra-short-pulse sources and new applications in the cutting of brittle materials should help the company to achieve its goal of 40 percent gross margin by the end of fiscal 2015, according to the CEO. However, in light of exchange rate issues, Rofin has adjusted its guidance for the full year and now predicts sales to land between $515 million and $535 million, rather than the revenues of $560 million it had previously predicted.

"Our gross margin demonstrates that we depend substantially on the quarterly product mix, but top-line was also heavily affected by fluctuation of the currencies which we, of course, cannot influence," concluded the CEO. "What we can do is control expenses and improve the product profit margins. So with the production phasing of our third generation of high-power fiber-lasers and the expected volume increase for our ultra-short-pulse lasers, we should realize the projected improvement in margins for the next quarters."

•  The markets were disappointed by the numbers, with shares in the company dropping by around eight percent in trading after the earnings announcement.