Ultrafast laser developer founded 21 years ago in Vienna is snapped up by the Californian photonics firm. 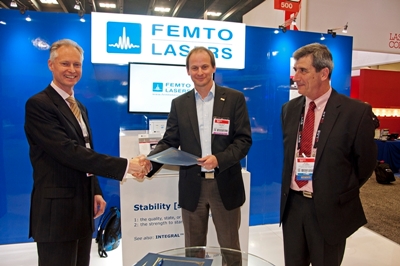 US photonics firm Newport is set to acquire Femtolasers Produktions, and integrate the Austrian ultrafast laser specialist within its Spectra-Physics laser division.

Known as a pioneer of attosecond science, where light pulses shorter even than the femtosecond timescale can be used to study fundamental physical, chemical and biological phenomena, Femtolasers was spun out of the Vienna University of Technology back in 1994.

Almost exactly a year ago, the company signed a deal to provide a crucial seed laser for what will become a state-of-the-art petawatt laser beamline at the Extreme Light Infrastructure (ELI) project in Prague. That involves a close collaboration with Lawrence Livermore National Laboratory.

David Allen, the senior VP at Newport who heads up the Spectra-Physics division, said: "Femtolasers has developed some truly impressive leading-edge technology that will be invaluable as we work together to develop the next generation of ultrafast lasers."

According to Newport, Femtolasers already has an installed base of more than 850 systems, in over 30 countries. It expects the Austrian company's sales to range between $8 million and $12 million in the 12 months immediately following the close of the acquisition, and its profitability to add to Newport's overall earnings.

Terms of the transaction, which is anticipated to close during the first quarter of 2015, were not disclosed.

Shares in Newport, which is due to report its latest financial results next week, appeared unmoved by the news. They traded up slightly after US markets opened following the announcement, to just under $19.50. That equates to a market capitalization of $775 million.

The two companies will be exhibiting separately at next week's SPIE Photonics West event, with Femtolasers at booth 1000 and Newport at booth 1401 during the main exhibition.