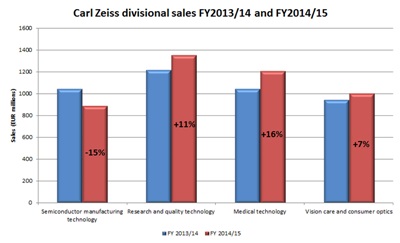 Carl Zeiss, one of the biggest and best-known companies operating in the optics sector, has reported a 15 per cent drop in sales for its semiconductor manufacturing technology division.

The firm, headquartered in the optics heartland of Jena, Germany, employs close to 25,000 people across its four divisions. For its latest financial year it posted an overall 5 per cent increase in sales, to €4.5 billion.

Reporting yearly earnings (before interest and taxes) of €369 million, Kaschke said: “The business trend was marked by two factors in particular – by the additional tailwind provided by positive currency effects in the dynamic fields of business such as industrial metrology, medical technology and microscopy, and by the headwind confronting the semiconductor market.”

In a presentation at the firm’s annual financial press conference, the CEO noted that the investment behavior of chip manufacturers was currently characterized by “increasing uncertainty”.

That sentiment, also evident in a recent SEMI survey of capital equipment spending by chip makers, is being exacerbated by ongoing delays in the deployment of extreme ultraviolet (EUV) lithography equipment.

Zeiss makes the optics that feature in state-of-the-art EUV wafer patterning systems that each cost upwards of €100 million. Although progress is being made, EUV appears to be inching, rather than racing, towards widespread deployment.

OCT innovation for eye care
With the company’s executive team anticipating only moderate economic growth next year, and no semiconductor upswing in sight, Kaschke said:

“Fiscal year 2015/16 will be no easier. Zeiss will feel the direct impact of the slowdown in growth now evident in the emerging economies and a further stagnation in the semiconductor market.”

As a result, the company predicts only a slight increase in sales and profit margins in the forthcoming year. On the plus side, Kaschke does see opportunities in the healthcare sector and the emergence of what in Germany is referred to as “Industry 4.0” – a reference to the fourth industrial revolution, which revolves around connections between machines and systems to deliver autonomous control. 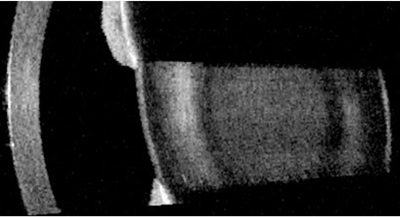 “We are proud to announce that Zeiss is the first company to bring the exciting new technology of optical coherent tomography (OCT) angiography to US customers.

"We hope the new non-invasive OCT angiography will become a routine imaging procedure in clinical practice.”

Able to image the blood vessels of a patient’s retina without injecting fluorescent dye, the non-invasive “AngioPlex” system is said to be faster, cheaper and safer than existing tools, while generating superior imagery.

Lonz also expects cataract surgeons to benefit from the company’s adoption of swept-source OCT in its “IOLMaster 700” system, which can image across the entire length of the eye.

While spectral domain (SD) OCT has become ubiquitous in eye care clinics, the swept-source variant – where the laser wavelength is swept in time – is faster and yields much deeper imagery.