Numbers are up but company value still struggling to regain mid-2015 high; more of the same forecast for next quarter. 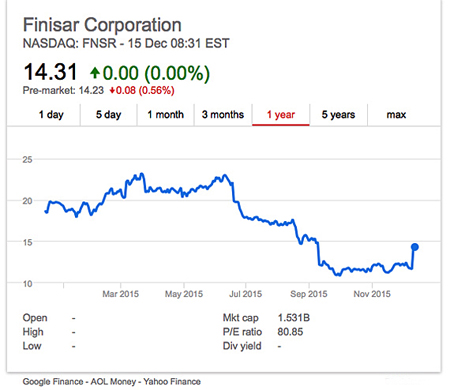 Finisar, a developer and vendor of subsystems and components for fiber-optic communications, has announced financial results for its second quarter of fiscal 2016, which ended November 1, 2015. Generally the figures showed an improvement on the previous quarter’s trading although the company’s own broad conclusions are that its sales into the telecoms market are set to grow, while the datacoms market is facing a decline – on a sequential basis.

The company’s share price responded to the announcement by strengthening from the previous month’s flat value of around $11-12 to $14.50 and steady through the past week. However, considering the longer term view of the past six months since the June 2015 peak of around $23 (and the year-ago persistent level of around $20), Finisar still has some way to go to counter a general H2 2015 decline.

Opening the analysts conference call on December 10, Jerry Rawls, Finisar's CEO, outlined the latest quarter’s major points, "Revenues for our second fiscal quarter were $321.1m compared to $314.0m in the prior quarter, an increase of approximately 2.3%. This increase was primarily driven by growth in 100 gigabit Ethernet transceivers and 10 gigabit tunable transceivers and wavelength selective switches for telecom WDM applications," he said. 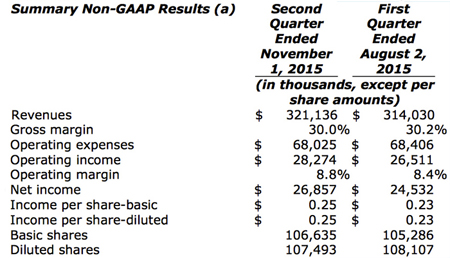 He continued, “The telecom sector revenue increased by $6.6m or 8.2%, which was primarily driven by growth in 10 gigabit tunable transceivers and wavelength selective switches. In the second quarter we had two 10% or greater customers. Our top 10 customers represented 58.2% of total revenues compared to 60.7% in the preceding quarter.”