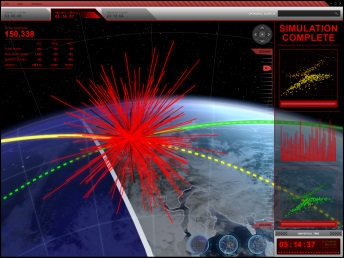 US defense contractor Lockheed Martin and Australia’s Electro Optic Systems say that they have broken ground on a new laser facility for tracking objects in space.

The two companies, who announced last year that they were collaborating on a system to be deployed in a remote part of Western Australia, say that they should be able to start delivering data and services from the laser tracker by late 2016.

Space debris – ranging from spent rocket parts to pieces of defunct hardware and fragments from previous collisions - is widely regarded as a huge potential threat to orbiting satellites, and it is hoped that the new facility will provide both commercial and government customers with an unprecedented view of these objects.

For example, the US Air Force has previously estimated that it suspects there to be more than 100,000 objects that could damage or destroy one of its satellites - but that only around 22,000 have so far been tracked.

Lockheed and EOS say that the new laser tracking site, based on optical sensors and designed to complement existing radar systems like the US Air Force’s “Space Fence”, will give operators a clearer picture of the debris that could damage their satellite networks and how best to avoid any collisions.

Although precise details of system capability have been kept confidential, EOS representatives have said previously that their laser tracker would be capable of detecting objects less than 10 cm across at distances beyond 1000 km.

Mark Valerio, the general manager of Lockheed’s military space division, said: "The expansion of space debris tracking by EOS and Lockheed Martin is expected to make a significant contribution to the preservation of the space environment, by providing data which will enable cost-effective debris maneuver for satellites."

"The accuracy of our optical sensor network, combined with an ability to reschedule tracking operations according to commercial priorities, will provide a trusted source of critical space data to commercial and government operators," Valerio added.

He added that the laser tracker would provide unique and exclusive data to EOS and Lockheed Martin, with each organization able to offer data and services on space debris. “Based on current contracts and active negotiations, EOS expects to commence the delivery of data and services by late 2016,” said Greene.

Data gathered by the various optical sensors and systems will be fused with software capable of characterizing and tracking man-made objects in orbit. Lockheed and EOS say that the system can also predict the paths of debris, giving operators advance warning of potential collisions.

As well as spawning the idea for the Oscar-winning film Gravity, the threat posed by space debris is also the subject of a dedicated NASA program office and a quarterly newsletter published by the space agency.

The latest edition of Orbital Debris Quarterly News details two recent maneuvers by the International Space Station to avoid space debris. One of those was to evade a fragment of an Iridium 33 satellite, which was itself the result of a collision with a Russian communications satellite in 2009.