Researchers at the Fraunhofer Institute for Wind Energy and Energy System Technology (IWES) in Bremerhaven, Germany, have developed a lidar-based wind measurement buoy with precise measurement technology that enables estimation of the potential profitability of marine windfarms.

Claudia Rudolph, scientist at IWES, commented, “Constant high wind speeds at sea can offset the huge investment costs for building the farms and connecting them to the grid. The profitability of wind farms comes from the difference between feed-in compensation and the costs for construction and maintenance.”

Using a special wind measurement buoy, based on a LiDAR (Light Detection and Ranging) the meteorologist and her team calculate the wind potential and therefore likely energy yields. The LiDAR system was supplied by Zephir Lidar, of Ledbury, UK.

The design of the Fraunhofer IWES LiDAR buoy is based on the light buoys that have been used in the North Sea for over 30 years, which the scientists have adapted. It is over 8m in length, has a diameter of 2.55m and weights 4.9t. It measures wind speeds at heights of between 40 and 200m.

Rudolph said, “LiDAR systems send pulsed laser beams into the atmosphere, which reflect off of aerosol particles in the air. From the frequency shift of the backscattered signal, the wind speed and direction are calculated at the corresponding measurement heights.”

Although the technology is already used on land, it was previously considered unsuitable for measurements on buoys and floating platforms because it was too imprecise. The buoy’s own movement, which distorts the measured values, prevented the reliable use of a LiDAR device. To allow these measurements to be carried out on moving structures, the IWES researchers developed a correction algorithm that subtracts the buoy’s own movement from the measurement values.

The new floating LiDAR system guarantees high measuring accuracy, comparable to the results obtained by fixed offshore wind met masts. This was the conclusion of validation measurements carried out in the North Sea, where the buoy was installed at a location with a water depth of 30m at the Alpha Ventus offshore farm 45km off the coast of the island of Borkum, near the FINO 1 wind met mast. There was a 99.7% correlation between the values from the met mast and those from the buoy.

“Out in deep water, the LiDAR buoy is a genuine alternative to wind met masts, which measure wind speeds only at a height of 100m,” said Rudolph. “Another advantage of the system is that the flexible buoy can be used anywhere at sea and is quick to install, making the costs five to ten times lower.” 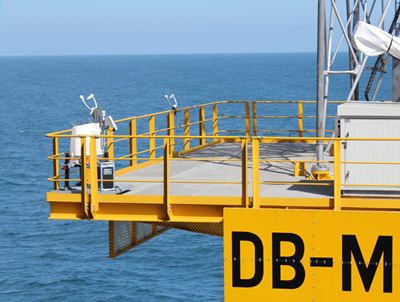 A ZephIR 300 wind lidar installed at Dogger Bank in the North Sea for the Forewind consortium has provided data which shows the technology has progressed to the stage where it can be used as an economical alternative to costly meteorological masts for wind data collection.

The Dogger Bank projects being developed by the Forewind consortium will have a capacity of 4.8GW and, as part of their assessment process, two meteorological mast platforms were installed during 2013. In November 2014, a ZephIR 300 wind lidar was installed on the east meteorological mast platform by sister company SeaRoc Group to provide continuous data above the existing mast height, while the mast underwent maintenance works.

Recently-published results confirm that the lidar was available for 100% of the time and correlations to the met mast were found to be excellent and at least as good as variations between individual cup anemometers. SeaRoc has now installed three ZephIR Lidars including two for Forewind, this one on the Dogger Bank Met Mast East and an earlier installation on the Cavendish platform in 2011.

Ian Locker, MD at ZephIR Lidar, commented, “The ZephIR Lidar poses clear long-term financial and health and safety advantages over traditional anemometry as it requires fewer personnel to carry out maintenance tasks and vessel time offshore is reduced. The results at this offshore development confirm the benefits ofr wind lidar offshore and its potential to replace fixed met mast structures, while delivering significant cost-savings and health and safety advantages.”