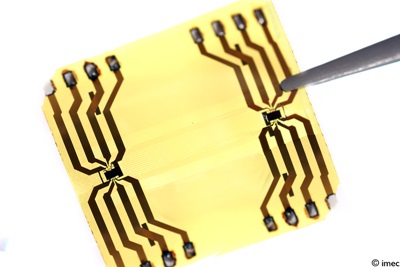 Scientists in Belgium are claiming a breakthrough advance for integrated photonics by fabricating an array of laser diodes on a large silicon wafer typical of those used in volume semiconductor production.

In a paper published in the latest issue of Nature Photonics the IMEC and University of Ghent team describes the development as the “first highly scalable monolithic solution” to a long-standing problem: integrating laser sources on a silicon platform.

And while the laser structures have so far only been demonstrated with optical pumping, the team led by Ghent’s Dries Van Thourhout suggests that electrical injection - a necessity for true photonic integration - could be readily achieved with the incorporation of a suitable blend of narrow-bandgap semiconductor material in the future.

“Lasing performance showed small variability along the array, illustrating the high material quality of the heteroepitaxial grown indium phosphide,” they write in the paper. “In addition, accurate control on the distribution of lasing wavelengths in the array was demonstrated by modifying the grating parameters.”

That ability to carefully control the laser wavelengths suggests that the devices ought to be compatible with wavelength division multiplexing (WDM) schemes that are used widely in today’s optical communications systems.

Add to that a very high-yielding process (the team claims that at least 98 per cent of more than 200 devices characterized so far have showed laser operation) and the prospects for this particular approach to photonic integration look very promising.

Top-down, monolithic approach
Previous efforts to combine the efficiency of compound semiconductor lasing structures with the scalability of a silicon substrate have largely focused on flip-chipping of pre-fabricated diodes, or mechanical bonding of III-V material. Some commercial progress has also been made, for optical interconnect applications.

However, these approaches are not compatible with the hugely scalable CMOS process, which would enable dramatically cheaper production.

The long-standing challenge has been to find a way to deposit the semiconductor material combination needed for lasing at the 1300 nm or 1550 nm optical communications wavelength while dealing with the problems caused by the major crystal lattice mismatch with silicon.

In their paper, they wrote: “Starting with millimeters-long InP waveguides of high optical quality grown selectively onto a silicon substrate and using standard top-down integration processes, including the definition of gratings on top of these waveguides, we fabricated DFB lasers exhibiting robust single-mode operation.”

Thin buffer layer crucial
The usual way to overcome the lattice mismatch between silicon and compound semiconductors is to grow a so-called buffer layer on top of the silicon. But for the particularly large mismatch of InP and silicon, this layer usually needs to be several microns thick, making integration of photonic devices on the same wafer extremely problematic.

Crucially, the IMEC team was able to produce high-quality InP waveguides on top of a buffer layer just 20 nm thick. The result was an InP-on-silicon array of DFB lasers emitting at between 915 nm and 935 nm when pumped with a nanosecond-pulsed Nd:YAG laser provided by Ekspla.

Although that is not the ideal lasing wavelength for silicon waveguides, and electrical pumping must also be achieved for real applications, Van Thourhout and colleagues outlined how these challenges could be met.

“The in-plane laser configuration employed makes it straightforward to adopt well-studied electrical injection schemes,” they wrote, adding that the InP-on-silicon material platform developed could act as a “virtual” InP substrate upon which conventional photonic structures could then be produced.

That approach would allow deposition of the compound semiconductor materials needed to red-shift the lasing wavelength into the telecoms realm at 1300 nm. And because the extremely thin buffer layer allows light to be emitted in the plane of the wafer, it is even possible to envisage butt-coupling the lasers to optical waveguides defined at the same level.

“In addition, direct contact of the III–V lasers with silicon-on-insulator (SOI) [wafers] will improve the thermal dissipation of the device, boosting its performance,” predicts the team. “This also forms a route towards electrical injection for the device.”

Cutting data center power consumption
They suggest that a wide range of applications stand to benefit from the kind of low-cost, on-chip lasers that could be produced using the approach, concluding that: “In particular, for on-chip optical interconnects, the demonstrated monolithic laser array, together with the WDM technology, may finally pave the way to terascale computing.”

Photonic integrated circuits (PICs) based on the technology could dramatically change the architecture of fiber-optic transceivers used in data center optical interconnects, by pushing down the cost of chip-level data transfer between logic and memory devices.

That would in turn enable a radical scaling of a data center’s capacity, while simultaneously reducing increasingly colossal power demands with higher-efficiency data transfer. According to analysts at the Yole Développement consultancy in France, data centers are on track to consume more than 500 TWh of energy annually by 2020 – but by implementing new technologies like silicon photonics this total could be cut by at least 10 per cent. They suggest that the technology could start to feature from 2018 onwards.

Importantly, the laser integration work was carried out in IMEC’s 300mm CMOS pilot line facility, providing a path to large volume manufacturing and with the potential collaboration of key chip-making partners like Intel, Sony, Samsung and TSMC.

IMEC says that efforts are now focused on growing the more complex semiconductor layer stacks needed for electrical injection of the lasers and emission in the 1300 nm wavelength range.