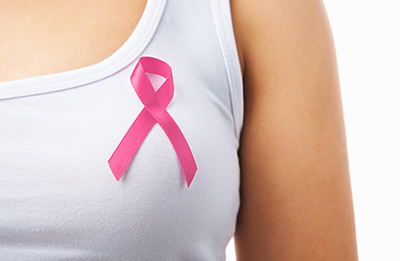 Scientists at Florida International University (FIU), FL, USA, have developed a new type of handheld optical scanner which offers the potential to perform in vivo breast cancer imaging in real time. The results are reported in Biomedical Physics & Engineering Express.

Sarah Erickson-Bhatt, researcher and an author on the paper, commented, “The device uses a near-infrared laser diode source to produce an image of the breast tissues. A notable advantage of the device is that it is more adaptable to breast shape and density, and that it allows imaging of the chest wall regions, which are harder to image with conventional techniques. The women scanned always commented on how comfortable it was to be scanned by our device – many of them said that they didn’t feel anything.”

The device builds an image of the tissue by mapping the optical absorption, which is altered by the concentration of haemoglobin – the protein in red blood cells. Regions with higher concentrations of haemoglobin may indicate higher blood flow due to an abnormality such as a tumor.

Developed at FIU’s Optical Imaging Laboratory, the hand-held optical imager employs a breast-contourable probe head to perform simultaneous illumination and detection of large surfaces towards near real-time imaging of human breast cancer. First generation and second generation versions of the imager have been developed and previously demonstrated imaging in tissue phantoms and healthy human subjects. Herein, the hand-held optical imagers are applied towards in vivo imaging of breast cancer subjects in an attempt to determine the ability of the imager to detect breast tumors. 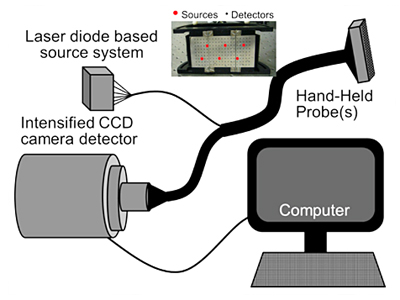 Both imagers use 785nm laser diode sources and intensified charge-coupled device camera detectors to generate 2D surface maps of total hemoglobin absorption. The subjects lay in supine position and images were collected at various locations on both the ipsilateral (tumor-containing) and contralateral (non-tumor containing) breasts.

The optical images (2D surface maps of optical absorption due to total hemoglobin concentration) show regions of higher intensity at the tumor location, which is indicative of increased vasculature and higher blood content due to the presence of the tumor. Additionally, a preliminary result indicates the potential to image lymphatic spread. This study demonstrates the potential of the hand-held optical devices to noninvasively image breast cancer in human subjects.

The optical analysis developed offers several benefits over mammography, with no ionising radiation dose and fewer issues imaging dense tissues. Anu Godavarty, another author of the paper, said, “Eventually, we hope that physicians will be able to use this for real-time imaging of breast tissues as part of regular assessment of the patients. We’re current working on the mathematical tools required to process the images and produce 3D tomographic images, in order to determine tumor size and depth.”

The Florida researchers’ on-going efforts involve extensive clinical work to demonstrate the capability of the device to pre-screen for any breast abnormality, followed by seeking US Food & Drug Administration approvals prior to clinical use.