OLEDs to dominate in smart phones but quantum-dot LCDs to grow fastest thanks to TV adoption, say Lux Research analysts. 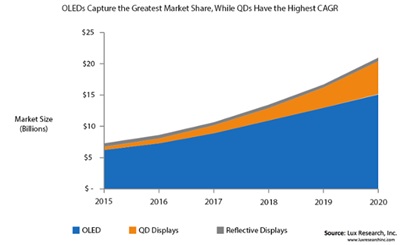 The market for new types of displays based on organic LEDs (OLEDs), quantum-dot (QD) enhancement and reflective technology will treble from today’s figure to reach more than $21 billion by the end of the decade.

That’s according to a new market projection published by the US-based think-tank Lux Research. The Lux team has evaluated the prospects for the different types of technologies vying to replace conventional LCD screens and create new applications in wearable and flexible devices.

The good news for proponents of OLEDs is that this market will jump from just over $6 billion today to around $15 billion by 2020. However, the bad news for OLED fans is that the potentially very lucrative market of TVs will not be taken over by this technology – Lux reckons that of that $15 billion total only $480 million will relate to OLED TV screens.

“Smart phones are the leading market [for OLED] due to superior visual performance and form factors,” Lux says. “However, wider adoption is limited by issues like differential ageing and high cost in large formats, which limits the large addressable market of TVs.”

Instead, they predict that QDs are going to make a major impact in TVs, with the market for QD-enhanced LCDs set to grow at a remarkable compound average rate of 60 per cent per year through 2020.

That translates to an expansion from only $510 million right now to an annual market worth $5.3 billion by the end of the decade. 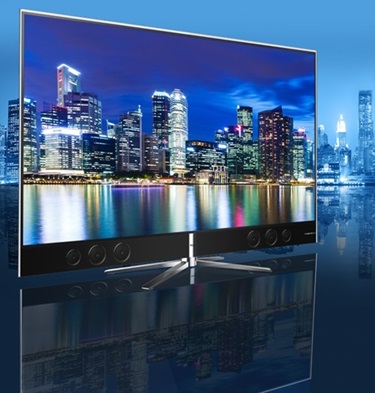 Going cadmium-free
One bone of contention that could impact the uptake of QD-enhanced LCDs is that the current technology is based on cadmium. As a highly toxic heavy metal, the use of cadmium is restricted, and there have been suggestions that the European Commission may implement further legislation in this area – although exemptions have been put in place for certain products such as First Solar’s cadmium telluride solar panels.

Lux's lead analyst on the report Tony Sun told optics.org that cadmium regulation would be a major factor in the development of the QD market. “We expect cadmium-free QDs to be a significant player in QD displays,” said Sun.

“On the technology side, cadmium-free QDs are narrowing the performance gap with cadmium-based. In general, indium-based QDs like indium phosphide (InP) generate light with wider linewidth than cadmium-based like cadmium selenide (CdSe), leading to colors that are not so pure,” he explained.

However, Sun says that developers like UK-based Nanoco Technologies now claim to have achieved similar optical performance at a similar cost to cadmium-based, by adding other compositions to InP.

And while cadmium-based QDs are starting to proliferate in TVs, he thinks that displays manufacturers are likely to play safe in face of the potential regulation by either switching to cadmium-free technologies, or at least having both options available.

The analyst believes that the cadmium-free technologies will start to make a significant impact on the market when they become mature - although exactly how quickly that might happen is difficult to predict.

Sun said: “It will largely depend on the legislation process and the implementation timeline, which remains unclear now and varies by country.” 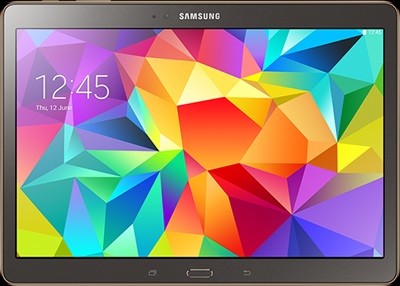 OLEDs in iPhones?
The uptake of OLEDs could be influenced dramatically by Apple. So far, the company has not used the technology in its iPhones, but speculation is again mounting that a future version incorporating an OLED display is becoming more likely.

The stock price of key OLED materials developer Universal Display recently spiked on that speculation, although the US company – which has a major supply deal with leading OLED display maker Samsung – has said that there would not be enough capacity in the market to provide for the vast number of iPhones made until 2017.

Personal finance web site The Motley Fool recently reported that the US Patent and Trademark Office has just published a new patent application from Apple relating to an integrated OLED-silicon display, while Apple’s CTO and chief designer Jony Ives had previously talked about the company using a more vivid, power-efficient and thinner display technology – which sounds very much like OLED.

Meanwhile Osram has indicated that it is going to be investing heavily in the development of OLED technology, as part of its plan to revitalize the company after spinning off its lamps division into a separate entity.

Reflective shake-up
One technology that Lux does not expect to see grow rapidly is that of reflective displays. While OLEDs look set to dominate in smaller form factors and QDs make a major impact in large TV screens, the reflective displays segment is expected to flat-line at around $590 million in 2020, only slightly above today’s $560 million.

That will be partly the result of an anticipated 40 per cent slump in the market for electronic reader devices like Amazon’s Kindle, which have not become the ubiquitous technologies many had predicted.

That decline will be a major hole to fill, but Lux sees emerging applications in signage, electronic shelf labels, and wearable devices that will make up for it. “Electrophoretic displays (EPDs) dominate the current reflective display market, but alternative reflective technologies – namely cholesteric LCDs (Ch-LCDs) and memory LCDs – will find opportunities from signage and wearables, respectively,” the company’s analysts predict.

But as far as microelectromechanical systems (MEMS) and electrowetting (EW) displays are concerned, there’s little to report in terms of a market. Lux says that a lot of technical improvements are still required before these technologies are ready to hit the commercial scene.

‘Developers need to think differently’
“What is clear is that there won’t be a single display dominating all applications,” Lux sums up. “While OLEDs, QD LCDs, and reflective displays can compete with LCDs and garner significant market share, the overall display industry will fragment in the coming years, with different technologies gaining favor in different segments.”

And with all those different displays technologies requiring very different architectures, developers of the chemicals and materials used will need to diversify their product portfolios if they want to address each separate sector.

“Display developers also need to broaden their scope as today’s displays incorporate more functions, including sensors and haptics, to become the central piece for communication between human and electronics devices,” says Lux.

“The way people perceive or process images is on the technology roadmap, with augmented reality headsets in the near-term solution, and futuristic eye-hacking by neuroscience technologies emerging from the cutting edge, forcing developers to think about displays differently.”