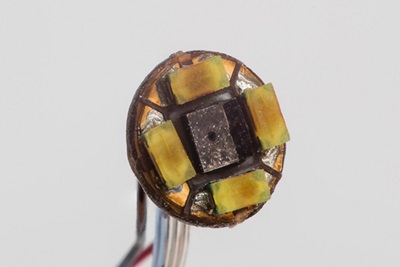 The all-cash deal will see CMOSIS transfer out of private equity ownership, almost exactly two years after the Antwerp, Belgium, company was bought by TA Associates.

ams says that CMOSIS, whose technology originated at the IMEC microelectronics research center, will add sales of around €60 million to its annual revenues - which currently stand at around €600 million.

Listed on the Swiss stock market but headquartered near the Austrian city Graz, ams describes itself as the "worldwide leader in intelligent integrated light sensors" and runs a center of excellence in optical sensors out of Plano, Texas.

CMOSIS will add expertise in both standard and customized high-performance area and line-scan CMOS image sensors for demanding applications.

Diverse markets
Those sensors are said to serve a broad range of high-end applications across markets like machine vision, medical, broadcast, traffic, scientific and photographic imaging. For example, CMOSIS‘ line of miniature 'NanEye' camera modules (see image, above, and video, below) is targeted at endoscopy-like applications, and recently won the German Innovation Award for Non-Clinical Intensive Care.

Set to be completed around the end of this year, the deal will also see more than 110 CMOSIS employees transfer to ams – swelling the Austrian firm’s staff ranks to around 1700.

ams CEO Kirk Laney said: "Acquiring CMOSIS is a highly complementary expansion of our sensor portfolio and another major step in executing our sensor solutions growth strategy. This transaction extends our market leadership in optical sensors and will strengthen our position as the leading pure-play sensor solutions provider for growth markets including Industry 4.0, the Internet of Things, and medical diagnostics."

He added: "Integrating cameras with advanced optical sensors will drive new sensor solutions across vertical markets and accelerate our growth plans as we combine CMOSIS' leading-edge intellectual property and design capabilities with our manufacturing competence and optical sensor strengths."

Fabless model
Unlike ams, CMOSIS operates a 'fabless' business model, meaning that it uses third-party foundry companies to manufacture its own sensor designs. That complements ams, which is one of a number of high-tech companies currently looking to expand its operations in upstate New York.

It is renting a new wafer fabrication facility that is being custom-built by state authorities. Fab construction is said to be on track, with a production ramp expected in early 2018.

Since being founded by former employees of the imec spin-out FillFactory back in 2007, CMOSIS grew quickly before the TA Associates deal in late 2013. Last year it grew again with the acquisition of Portugal-based AWAIBA, which had developed high-speed optical sensors boasting a very high dynamic range – ideal for applications like crash-tests and surveillance.

Challenging applications
ams, which made a net profit of €34 million on sales of €153 million in its latest financial quarter, says that CMOSIS' operations are even more profitable than that.

The Austrian firm adds that it will be able to fund the acquisition with existing cash and available credit lines, with no need for any additional finance. The deal should then close within six weeks – assuming that the relevant regulatory approvals are received.

Luc de Mey, CEO of CMOSIS, said of the agreement: "CMOSIS has built a leading position in some of the most challenging imaging applications based on our deep technology expertise in CMOS area and line scan image sensors.

"Our team is at the forefront of global shutter technology for high-end imaging [with] more than 15 years of experience in this field. We are excited to join ams, creating a leader in advanced imaging solutions. We will leverage ams' technical and operational expertise and profit from the global access to potential new customers to realize our full growth potential."