But “international market uncertainties” still give Japanese giant cause for concern.

Hamamatsu Photonics, a leading developer of photomultiplier tubes, imaging systems and opto-semiconductors, has reported another positive set of financial results for its fiscal year that ended September 30.

But the company greeted its almost 8% annual improvement in sales with some caution, warning of an uncertain global marketplace in 2016. Although Japan’s economy had picked up, international business displayed a “heightened sense of uncertainty” due to a perceived recent slowdown in newly developing countries.

In its financial statement for the year ending September 30, released November 9, the company gave a detailed analysis of its own performance, in the context of the national (Japanese) economy and that of the international business landscape. Akira Hiruma, Hamamatsu’s President and Chief Executive Officer presided over the report, which stated:

“During the latest fiscal year, Japan’s economy as a whole maintained a gradual recovery as the corporate earnings picture brightened and personal consumption remained brisk. Nevertheless, concerns about the future direction of the economy increased, driven by factors such as a heightened sense of uncertainty that was influenced by the economic slowdown in newly developing countries towards the end of the fiscal year.

”Given these circumstances, Hamamatsu has pursued research and development by utilizing the proprietary photonics technologies we have cultivated over many years, and we have worked to expand net sales and earnings by undertaking aggressive sales and marketing activities.”

Imaging and Measurement Instruments In the Image processing and measurement systems business, the company said its failure analysis systems for semiconductor devices “have earned a solid reputation for high-definition and high sensitivity in a wide range of fields”, which drove up sales in Japan and overseas.

Sales of digital cameras also increased, particularly for the field of life sciences and biotechnology. In addition, sales of X-ray line sensor cameras, primarily for food inspection applications, also expanded. Consequently, sales for the Imaging and Measurement Instruments business were ¥16,201m ($132m / €122.8m), up by 15.5%, and operating income was ¥3,793m ($30.9m / €28.8m) , up by 51.9% from the previous year. 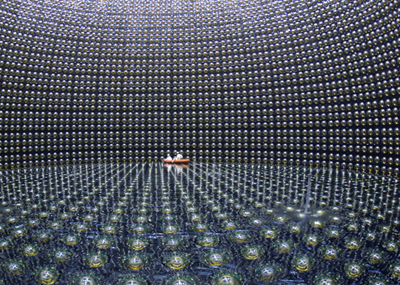 Hamamatsu-assisted: Inside the Super-Kamiokande Observatory.

Last month, Hamamatsu Photonics released a statement congratulating Professor Takaaki Kajita of the University of Tokyo and Professor Arthur B. McDonald of Queen's University (Canada) for being jointly awarded the 2015 Nobel Prize in Physics for the discovery of neutrino oscillations, which shows that neutrinos have mass.

The company said it was delighted by the recognition of Professor Kajita, whose research at the Super Kamiokande was conducted in a large-scale facility that included photomultiplier tubes manufactured by Hamamatsu’s Electron Tube Division. Professor Kajita was one of several top-tier physics researchers in Japan that provided feedback to Hamamatsu during the development of the high-performance 20-inch photomultiplier tube installed at the Super Kamiokande facility to detect neutrinos.

When observations at the facility began in 1996, there were 11,200 pieces of this photomultiplier tube installed in a 50,000-ton tank of pure water placed 1,000 meters underground. In 1998, when Professor Kajita announced the results of his observations at an international conference on neutrino astrophysics in Gifu Prefecture, his statement that “there is mass in neutrinos” was widely reported by news media in Japan.