JDSU spin-off Lumentum Holdings, which became an independent company in August 2015, has reported results for its fiscal first quarter ended September 26, 2015, at the top end of its August forecast range. For the first five weeks of its first quarter’s trading, Lumentum was part of JDSU, which is now Viavi Solutions, and began operations as an independent public company on August 1, 2015.

Following the generally positive announcements, made at the company’s analysts and press conference in Milpitas, Ca, US, on 10 November 2015, the company’s share price immediately rose by approximately $3 to $19 per share from the previous week’s trend of approximately $16 (see chart below).

Alan Lowe, president and CEO commented, “Based on Lumentum's cost structure, had we been a stand-alone company for the entire first quarter, the non-GAAP operating margin would have been approximately 8.3%, and non-GAAP earnings per share would have been $0.29 per share. 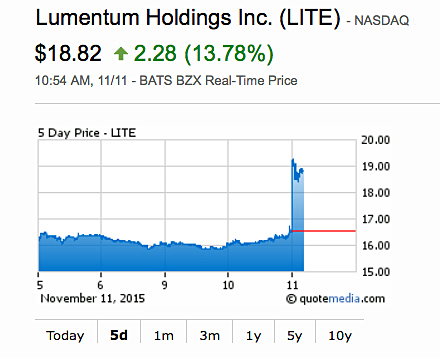 “We delivered solid first quarter results with revenue and earnings above the mid-point of our guidance. Our TrueFlex ROADM revenue increased approximately 27% sequentially, and we expect continued growth of both our TrueFlex and 100G products into calendar 2016. I am excited about the opportunities in front of Lumentum as we embark upon a journey to grow our business and generate shareholder value.”