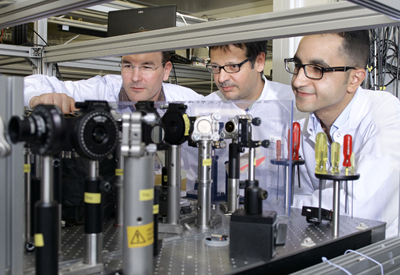 Christoph Hauri, Carlo Vicario and Mostafa Shalaby in the laser laboratory at PSI.

Researchers from the Paul Scherrer Institute (PSI), Villigen, Switzerland, have succeeded in using commercially-available camera technology to visualize terahertz light. In doing so, they are have achieved a significantly lower cost alternative to current detention procedures available to date, whilst also increasing comparative image resolution by a factor of 25.

The properties of terahertz light suit it to many applications, from safety technology to medical diagnostics. It is also an important tool for research. At PSI, it will be used for the experiments on the X-ray free-electron laser, SwissFEL. The terahertz laser developed at PSI is currently the world’s most intensive source of terahertz light, which has enabled the new detection method by a relatively simple CCD camera system. The researchers have published their findings in Nature Communications.

The growing industrial and commercial adoption of technologies based on terahertz light reflect its importance in a variety of security and medical applications. It can penetrate paper, plastic or textiles easily and renders any objects positioned behind them visible. Although its penetration depth in biological tissue is only a few millimeters, it has one property that also makes it particularly interesting for medical diagnostics: unlike X-rays, terahertz radiation leaves biological tissue unharmed.

Terahertz light is harmless to living tissue because it comprises photons that are relatively low in energy. This property is advantageous for research, where it can help to trigger certain photonic processes without leaving any trace. One example is research into new materials for magnetic data storage, where flashes of terahertz light can instantaneously change the magnetization or the optical properties of the material under test.

However, the value of the low energy of terahertz radiation can also be its weakness, because detecting it can be a problem. Until recently, it was only possible to visualize terahertz light using relatively expensive bolometers, which are also prone to give false readings. In addition, bolometer image resolution achievable is comparatively low. Relatively cheap CCD sensors, which are widely used in research and readily produce a sharp image have not been used to detect terahertz light which is typically too weak for detection by the robust CCD sensors.

Mostafa Shalaby, who carried out the CCD-based terahertz detection experiment, explained what he is calling a technological milestone: “Now that the terahertz light is intensive enough to visualize with a conventional CCD sensor, we are getting images with a resolution that is 25 times better than with the significantly more expensive bolometer.

"This is because the pixel size of the CCD sensor is only around one fifth of that of the bolometer.” Furthermore, because a CCD sensor can be used, another significant advantage is that its sensitivity to environmental influences like heat is negligible – unlike the over-sensitive bolometers. Considering that the cost of a bolometer is usually $50-60,000 and the Dataray CCD used by PSI is around $2000, with the actual sensor component costing only $100, the saving is significant. 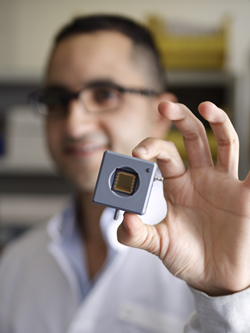 In an interview with optics.org, Shalaby explained how a commercial partner – Dataray, Redding, Ca, USA – has adapted the terahertz sensing technology into a new product to be presented at Photonics West in San Francisco, in February 2016.

“Our development of the increased-power terahertz source was primarily motivated by the PSI’s FEL developments but the potential of improved detection by CCD or CMOS sensors could also be used by other parties for various applications. The development will be licensed by PSI, which has patented the higher power terahertz source. The main objective is for us to use this technique for the FEL – but that is still a few years away,” Shalaby said.

“Another development we are planning at PSI is to further increase the sensitivity of the sensor, by using CMOS technology because it is more sensitive to terahertz rays, with its smaller bandgap.”

Teraview, Cambridge, UK, is a fast-growing, terahertz technology focused company, which has recently been the subject of a $10 million investment by a consortium led by Samsung Ventures. What does the company think about the new sensing achievement developed at PSI? optics.org interviewed Teraview spokesman Alun Marshall.

optics.org Is Teraveiw also working in the area of improving and making cheaper detection and measurement techniques for terahertz radiation?

AM Yes. We have recently reduced the cost in our system by 30% and we are also looking at alternative sources and detection technologies.

o.o. Do you consider that PSI's improved and more economical detection technique for this radiation is significant?

AM Their technology could not be used in our semiconductor or automotive market applications, but is promising for future applications with substantially more development.

o.o. Could it be of benefit to the types of application that Teraview is applying terahertz radiation to, such as in semiconductor manufacturing, biomedical or security applications?

AM Perhaps in security, such as large area scanning, once it is substantially more developed.

o.o. How could this development benefit a systems developer such as Teraview?

AM It seems to be very healthy and encouraging development, which could be used in specific markets in the future.