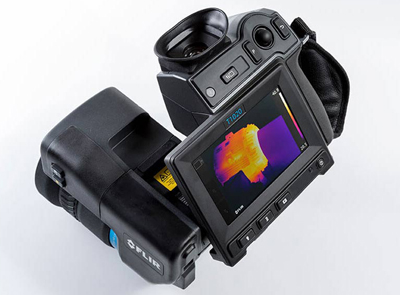 On a constant-currency basis, revenue for the third quarter was up 6% compared to the prior year’s equivalent, as foreign currency exchange fluctuations negatively impacted revenue by approximately $14 million.

Andy Teich, President and CEO of FLIR, commented, “In the third quarter we have seen constant currency revenue growth of 6%, improved our operating profitability, significantly improved our cash flow, and introduced several new market-defining products, however, the global economic environment created a headwind for our overall performance.

“The company’s ability to advance our sensing technologies, develop products, and address new market opportunities enables our mission of being what we call the 'World's Sixth Sense.' We have confidence in our ability to create long-term shareholder value given our focus on innovation, product differentiation, and market positioning."

Surveillance and Security up; Instruments and Maritime down

Considering Flir’s segment performances, Surveillance contributed $131.6 million, roughly one third of total revenue during Q3, up 5% over the prior year. Instruments generated $74.8 million, down 9% on Q3 2014, which was negatively impacted by foreign currency exchange fluctuations. OEM & Emerging Markets achieved revenue of $51.4 million in Q3, up 3% over the prior year.

Revenue from Flir’s Maritime segment was $38.9 million, down 13% from Q3 2014, which was also negatively impacted by foreign currency exchange fluctuations by approximately $4 million, resulting in a 4% decline on a constant currency basis. Security segment revenue was $59.3 million, an increase of 22% over last year’s equivalents. The Detection segment contributed $25.8 million of revenue, an increase of 7% from the prior year.

Following the presentations to analysts by Flir VPs, including new CFO Amit Singhi, the company's President and CEO Andy Teich concluded, "While the third quarter came in below our expectations, we saw many reasons for enthusiasm for the future. Our teams continue to introduce cutting edge products. Our Lepton [technology] continues to be a key component to creating differentiated solutions in many markets. This quarter we have introduced our ninth and tenth new products utilizing our revolutionary Lepton sensor."

He continued, "Our government businesses have responded to cyclical spending softness by focusing on our unique CDMQ [Commercially Derived Military Qualified] model. The recent CCFLIR2 and international program wins are good examples of how we can be successful with this strategy. Additionally, our product volumes continue to grow at a strong pace, which is helping to build brand momentum and further reduce costs by leveraging our vertically integrated capabilities."

Based on financial results for the first nine months of 2015 and the outlook for the remainder of the year, Flir said it now expects revenue for the full year 2015 to be in the range of $1.52 billion to $1.57 billion and net earnings, excluding restructuring charges and the third quarter discrete tax benefit described above, to be in the range of $1.55 to $1.60 per diluted share.

Including the impact of the third quarter discrete tax benefit and an estimated $12 million after-tax gain in the fourth quarter on an investment, net earnings are expected to be in the range of $1.76 to $1.81 per diluted share. Flir's Board of Directors declared a quarterly cash dividend of $0.11 per share on common stock, payable in December.