High-profile start-up is due to begin shipping its low-cost CO2 laser cutters in December. 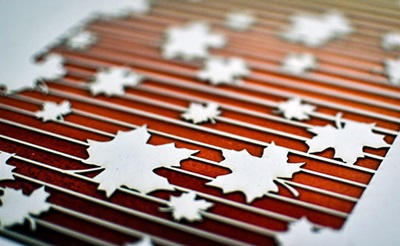 Glowforge, a Seattle start-up aiming to revolutionize the world of 3D printing, says it has now raised a record $28 million in pre-orders for its carbon dioxide laser systems.

The firm is targeting individual consumers and small enterprises with its low-cost equipment, offering its entry-level “Glowforge Basic” system for $2395 via the Glowforge web site.

After 30 days collecting pre-orders, the company announced that it had raised $27.9 million. That is believed to be a record total for a fixed-length crowdfunding campaign, beating the previous best of $20.3 million set on Kickstarter earlier this year by Pebble smart watches.

The Glowforge laser systems are in fact subtractive, rather than additive, in nature – incorporating what by industrial standards is a relatively low-power CO2 laser source to cut, slice and engrave materials like paper, wood and leather.

According to the Glowforge web site, the equipment is based around a custom-built CO2 laser operating at either 40 W or 45 W output power, depending on the model selected.

A factory-calibrated optical system and enclosed optical path designed to eliminate the need for cleaning, replacing or realigning any optical components is also specified.

Depending on exactly which models have been ordered by the early adopters, the $28 million figure suggests that Glowforge must now assemble and ship at least 6000 systems. The company says that it plans to deliver the first of those in December, with the bulk of the current orders fulfilled during the first half of 2016.

Venture round
The apparent success of the crowdfunding campaign caps a remarkable few months for Glowforge. Established by entrepreneur Dan Shapiro as recently as 2014, it raised $9 million of series A funding in May 2015, a round including interest from the founders of 3D printing company MakerBot.

Since then the company has revealed more details about the nature of the laser systems, and attracted high-profile media interest from the likes of the New York Times, The Wall Street Journal, Fortune magazine and technology web site Ars Technica, which produced this video of its recent visit to the firm’s headquarters.

Glowforge is far from the only company seeking to raise money via crowdfunding for home-based laser printing, cutting or engraving equipment – as a brief look on Kickstarter.com confirms – while similar industrial laser tools have been on the market for several years.

Where the company is different is in the slick, consumer-friendly design of its systems, which more closely resemble an office-style printer or photocopier than a laser engraving tool, the low price point of the equipment, and the ability to convert a design into a cut or engraved piece of material with a single click.

Part of the reason for that is an optical setup that automatically focuses the laser, meaning that no alignment of the target material is required.

Stakes raised
As Shapiro acknowledged in a press release announcing the $28 million in crowdfunding, the challenge is now for Glowforge to assemble and deliver the thousands of tools that have been ordered.

“We did not launch this to set records, and we were amazed when the records started to fall,” he said. “The immense wave of support we’ve received in these past 30 days means the stakes are higher, but we can’t wait to start delivering.”

Shapiro declined to elaborate when asked by optics.org how Glowforge would be able to get its hands on all those carbon dioxide lasers, although he did suggest that any health and safety concerns around deploying a quasi-industrial CO2 laser in the home were unfounded.

“Our Pro model is a Class IV enclosure and requires appropriate safety precautions,” he said. “The Basic, however, is a Class I enclosure. To the best of our knowledge, it's the first CNC laser cutter/engraver that has a Class I enclosure, which makes it appropriate for home use. Of course, there are lots of other consumer products that contain powerful lasers in enclosures that render them safe, like Blu-Ray recorders.”