IPG shrugs off China worries with another record quarter 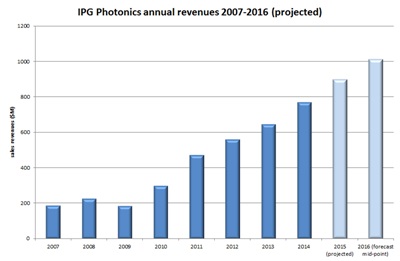 Demand for IPG Photonics’ fiber lasers shows no sign of abating, despite the strong US dollar and fears of an economic slowdown in China.

The Massachusetts company, which dominates the market for industrial fiber lasers, has just posted another record quarterly sales figure of $243.5 million, up 22 per cent from the same period last year despite negative currency effects.

That takes IPG’s sales for the first nine months of the year to $678 million, while the closing quarter of 2015 is now expected to add at least another $215 million to the total.

He added that demand remained strong in the key market of China, as well as in North America and Europe, although sales in Korea and Japan fell.

In a conference call with investors, Gapontsev said: “Our European OEM cutting customers had great growth in the quarter and are moving up the power scale, allowing them to improve processing speeds and cut thicker metals.”

The growing momentum in Europe and an expanding applications base are expected to help generate further sales growth of between 10 and 15 per cent next year – suggesting that IPG will be closing in on annual revenues of $1 billion in 2016.

Batteries and brazing fuel demand
While those very established materials processing deployments of fiber lasers in cutting and welding are expected to keep growing, the CEO also listed several examples of new applications that he believes will diversify the firm’s base and help to propel next year’s revenues upwards.

A key one appears to be battery welding, which Gapontsev highlighted as a major emerging opportunity. “Rechargeable batteries are everywhere - in cell phones, electronic devices, hybrid and electric cars - and are now moving to the power grid,” he said. “Although we are limited in saying much about specific customers, we have a robust pipeline of projects with several battery manufacturers that we are working on.”

Digital cinema projection with lasers is another application catching Gapontsev’s eye, and during the September quarter IPG completed a customer demonstration with the first prototype of its new red, green and blue laser platform. A more sophisticated version of the speckle-free light source should ship early next year, the CEO added.

Meanwhile the new triple-beam source that IPG showed off at this year’s Laser World of Photonics event is said to be “gaining traction” with car manufacturers for brazing zinc-coated steel.

“We’re seeing increased levels of interest in this one-of-a-kind product,” Gapontsev told investors. “In fact, we recently won a sale from the incumbent laser supplier for this application. [It] presents a significant opportunity for IPG in the coming years.”

50 kW laser shipment
On the extreme-high-power front, IPG has also recently shipped another 50 kW laser to NASA, which is using the equipment to simulate atmospheric re-entry conditions to test materials for the new “Orion” manned craft.

IPG is also set to benefit from the emergence of high-power laser weapons, with recent developments involving the defense contractors Lockheed Martin and Northrop Grumman strongly suggesting that the US military sees the technology as increasingly viable. The 100 kW-plus powers needed for military use can be achieved by combining the output of several high-power fiber lasers.

Despite the wider macroeconomic uncertainty and fears of a sharp slowdown in Chinese demand for manufacturing equipment, Gapontsev and colleague Tim Mammen, IPG’s CFO, said that they expected their sales to China to keep rising – albeit at a more muted rate of growth.

However, IPG has historically been somewhat reliant on one Chinese customer in particular. Han’s Laser has previously been identified in IPG’s accounts as responsible for 11 per cent of total company sales in both 2013 and 2014, and the company says it is now working hard to diversify its customer base in the country.

That could be helped by domestic rivals to IPG in China facing problems of their own making. Mammen told investors that by slashing prices of their fiber lasers to an unsustainable degree, some of those rivals had “undermined their own financial stability”. As a result of that, he thinks that selling prices in China should be more stable than in recent years.

Global footprint growing
Gapontsev and Mammen now expect further revenue growth of between 10 and 15 per cent in 2016 overall, and the implication is that next year will see IPG posting sales in excess of $1 billion for the first time.

With that in mind, Gapontsev said that the company was establishing new operations in Brazil, Mexico and the Czech Republic, while also expending its existing laser applications center in Santa Clara, California.

And before those expansions IPG will be opening its new Chinese office in Wuhan, the center of the country’s photonics industry and also a key location for automotive manufacturing and heavy industry.

If the executive team is correct with its financial forecast for 2016, it could also see IPG’s sales eclipse those of Germany’s Trumpf. Although the revenues of the two rival laser firms are inevitably skewed by currency effects, last week Trumpf said that its laser technology division had posted sales of €890 million (around $980 million at current exchange rates) for the year to June 30, 2015.

Next year both companies will be vying to break the billion-dollar barrier for the first time.

• Investors appeared to respond positively to IPG’s commentary on its prospects for the remainder of 2015 and outlook for next year, pushing the company’s stock price up more than 6 per cent to $78.50 after the call with Gapontsev and Mammen - equivalent to a market capitalization in excess of $4 billion.