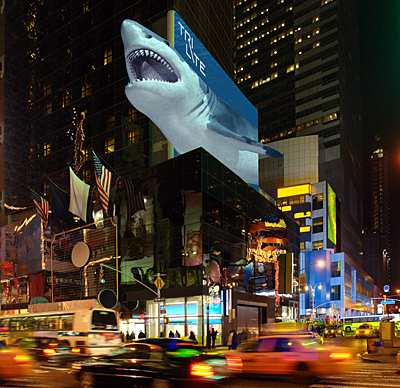 Billboard of the future? A simulation of large-scale glasses-free 3D display.

A partnership between the Technical University of Vienna (TU Wien), Austria, and TriLite Technologies has developed a new prototype for a 3D display that can be used without 3D glasses. The large scale display will be showcased next week at the “Back to the Future Day” – October 21st, 2015 – which is the future date to which Marty McFly, the star of the 1989 movie, travelled.

Having refined an initial monochrome prototype into a color version, the development partnership is now seeking commercial partners to take the display technology to market. Their work has recently been published in Optics Express.

One of the futuristic technological innovations presented in the film was a huge 3D display. The TU Wien’s development statement says, “As far as the invention of the display is concerned, Hollywood was almost right. Such displays will soon be possible. TU Wien and TriLite Technologies have developed a display element which uses special micro optics and moving micro mirrors to project different pictures into different directions. This technology can be used to create 3D displays without the need for 3D glasses.”

The first prototype was developed by TriLite Technologies and TU Wien earlier in 2015. Each 3D pixel, which they call “Trixels", consists of a laser and a moveable mirror. The mirror directs the laser beams across the viewers’ field of vision, from left to right. During that movement the image information is changed. The design enables different pictures to be sent to the viewer´s left and right eyes, so that a 3D effect is created without the need for 3D glasses.

Now, a more advanced second prototype has been produced. It is now a full color display, a significant advancement over the first monochromatic version. Each Trixel has been equipped with three different lasers (red, green and blue). The module consists of 12x9 Trixels, so any number of modules can be assembled to create a large outdoor display. 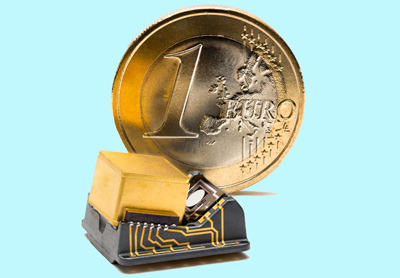 A Trixel with a movable mirror.

“The software for controlling the modules and displaying movies has already been developed,” commented Jörg Reitterer, from TriLite Technologies, and a PhD student in Professor Ulrich Schmid’s team at TU Wien. “We can use any off-the-shelf 3D movie and play it on our display.”

“The basic technology was invented by TriLite Technologies in 2011. At TU Wien, three research institutes worked on different tasks such as steering the Trixels and optimizing the connection between them. The technology is now ready for the market, and we are looking for partners for mass production all over the world”, says Franz Fidler, CTO of TriLite Technologies.

The Optics Express article concludes: "We have designed an auto stereoscopic, large-scale, multi-view laser display for outdoor use. The individual Trixels of our display incorporate laser light sources, leading to sunlight readable luminance. MEMS mirrors deflect the emitted light and form different images for the left and right eye of the viewer to achieve the autostereoscopic effect in a time-multiplexed manner without any loss of resolution. The proposed concept allows for a modular display, imposing no limits on the total size.

"We calculate the maximum distance, at which a 3D effect can be perceived, the maximum number of 3D viewing zones, as well as the luminance of the display. Assuming perfectly flat reflective surfaces of the MEMS mirrors, maximum viewing distances of up to approximately 70 meters can be achieved. The volume of a single Trixel including the package is only 0.96 cm3 resulting in a Trixel pitch of 12 mm. Our prototype display is capable of sending different image information to the left and right eyes of multiple viewers, effectively proofing our proposed approach."