First laser to be built using modular approach and commercial fiber sources will be a 60 kW system for the US Army. 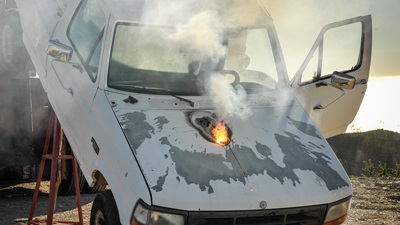 US defense contractor Lockheed Martin says that it is set to begin making a new generation of modular high-power fiber laser weapons this month.

Lockheed, which won a $25 million contract from the US Army to build a “weapons-grade” laser system back in April 2014, says that the modular laser design allows the laser power to be varied across an extremely wide range – depending on the specific needs of each mission and threat.

The laser modules will be produced at the firm’s Bothell, Washington, facility. That is the site of its Aculight fiber laser subsidiary, which Lockheed acquired back in 2008.

Crucially, the modular design incorporates commercial fiber laser components that can be assembled relatively easily – making laser system production less expensive and more flexible. “The Army has the option to add more modules and increase power from 60 kW to 120 kW as a result of the laser’s modularity,” notes Lockheed.

Iain Mckinnie, who heads up the company’s business development effort for laser sensors and systems, highlighted the reliability of that approach in a Lockheed statement. “A robust laser system with minimal operational down-time results from the integration of modular fiber-based lasers,” he said.

“With modular lasers, the possibility of a complete system failure due to a single-point disruption is dramatically lessened. Production is also affordable due to the ease of reproducing module components.”

Spectral beam combining
The Lockheed laser system combines multiple fiber modules to generate a beam with the kind of intensity needed to destroy objects such as enemy drones or more conventional munitions. According to the company while the way that the beams are combined – using a spectral technique - might appear complex, a single person can easily operate the laser itself.

“Laser weapons provide a complement to traditional kinetic weapons in the battlefield,” predicts Lockheed. “In the future, they will offer reliable protection against threats such as swarms of drones or large numbers of rockets and mortars.”

Lockheed is one of a number of US and European defense firms working to develop laser weapons. Others include Boeing, which has worked closely with Trumpf in the past, while Northrop Grumman and MBDA Systems have also developed powerful weapons.

And while the promise of such high-power systems has been evident for decades, recent developments suggest that they really are closing in on genuine military deployment. Late last year the US Navy tested out a 30 kW laser on board the USS Ponce in the Persian Gulf, while Lockheed claimed that its own “ATHENA” 30 kW laser weapon was able to destroy a truck from a stand-off distance of one mile.

‘Get serious’
Earlier this year, the influential US think-tank the Center for a New American Security – which has close links with presidential candidate Hillary Clinton – published a report urging the Department of Defense to “get serious” about laser weapons, and to establish a “champion” at the department to lead development of the technology.

“If [the] DOD is to field operationally meaningful directed energy weapons, it should increase spending by two to three times for high-energy lasers,” wrote report author Jason Ellis, adding that the department should both look to deploy existing laser technologies for near-term applications like drone destruction, and invest in the longer-term development of much more powerful sources to be used against higher-end threats like ballistic and cruise missiles.

Now, Lockheed says that it intends to develop a family of laser weapon systems with various power levels, tailored to address missions across sea, air and ground platforms.