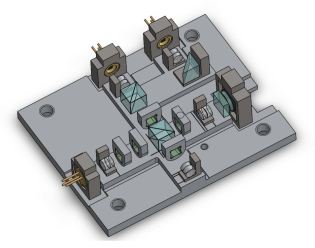 The capabilities of optical coherence tomography (OCT) as a non-contact imaging technique have become readily apparent since it first made inroads into ophthalmology clinics in the 1990s, but the inherent size and complexity of the instrumental platforms have conspired to keep it out of lower-cost or consumer-based applications.

That may now be about to change, with the development of a new OCT platform christened multiple reference OCT (MR-OCT) by Compact Imaging, a California start-up with strong Irish connections.

The company believes MR-OCT offers a way to bring the technique's biometric and imaging capabilities to applications where cost and form-factor are critical, making it attractive to developers of smartphones, wearable technologies, or security systems.

Compact Imaging's breakthrough hinges on a modified version of the usual architecture employed for time-domain OCT. A partial mirror is placed close to the reference mirror, causing some of the reference beam's light to be reflected multiple times between the two mirrors. In addition, the reference mirror itself is attached to a low-cost oscillating miniature actuator, moving it back and forth.

In use, the partial mirror allows a portion of light to proceed onwards and form the reference beam for the OCT operation, while the rest makes a return journey to the reference mirror and duly takes part in subsequent reflections -  effectively creating multiple scan segments, each increasingly delayed by its trip between the mirrors.

The combination of the partial mirror and the oscillating reference mirror means that the OCT reference beam becomes a composite signal. When compared with the signal from the probe beam hitting a sample, the resulting interference signals correspond to light backscattered from regions successively deeper within the target.

"Moving the reference mirror by just a small amount, some 35 microns, and having the light from it interact with a partial mirror creates multiple reference signals, which then of course interact with the signals from the probe beam directed at the target," said Compact Imaging CEO Don Bogue.

An enhanced scanning depth is valuable on its own, but it's the potential simplicity and cost-effectiveness of MR-OCT's optomechanical architecture that is crucial to the revolution which Compact Imaging now foresees.

The company's own working MR-OCT research system employs a voice coil extracted from the optical pickup head of a DVD player, and the company envisages the heart of working MR-OCT units being of similarly convenient size. Not coincidentally, system inventors Josh Hogan and Carol Wilson were previously involved in the development of the DVD+RW recording format while at HP Labs.

"Our lenses and beam splitters are all either consumer level items or have a direct analogue in the consumer domain," commented Bogue. "That means we can make a low-cost system, while the design itself allows that system to fit into an inherently small footprint with low operating power."

Under the skin
Potential applications for a genuinely low-cost compact OCT platform could include a number of uses in health monitoring and non-destructive testing. 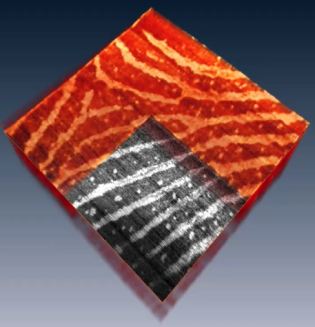 A method to see through any surface-level attempts at forgery and confirm authentic sub-dermal markers could add a valuable layer of security to existing databases of biometric information, without rendering them obsolete.

Imaging of blood flow and pulsation effects with MR-OCT may ultimately prove valuable new additions to biometric assessment techniques too.

The time-domain version of OCT has had inherent difficulty matching the headline-grabbing performance figures boasted by the alternative Fourier-domain and swept-source versions of the technique - but systems like that are far out of reach for these kinds of biometric applications.

"Those OCT platforms are pitched at the most advanced scientific and clinical diagnostic uses," Bogue said. "But if the issue is how to get OCT and its capabilities into volume applications, then you simply can't be talking about that kind of cost or complexity. You need systems that are the size and cost of the optical units in a DVD drive, and we are not aware of anyone else approaching the market in ways that will produce a solution of the same low cost and robustness as MR-OCT."

The Ireland connection
In March 2015 Compact Imaging announced a collaboration with the Irish Photonic Integration Center (IPIC) in Cork, aimed at commercialization of the MR-OCT platform. The Tissue Optics and Microcirculation Imaging lab at NUI Galway is another collaborative partner, and Compact Imaging was also mentioned at the opening of the Photonics Ireland 2015 conference in September 2015.

But in fact the Irish connections go deeper. Co-inventor Josh Hogan attended University College Dublin and Ulster University prior to working in California, and a high percentage of Compact Imaging's investment capital has come from Irish institutions or individuals connected with the country, according to Bogue.

IPIC's involvement has been key to the company's success in miniaturizing the technology from its initial bench-top implementation. The first-generation prototypes now measure about 50 x 50 mm, and Bogue indicated that his road map towards even smaller versions was on course to conclude early in 2016.

"Our next phase will see the technology becoming incorporated in products and brought to market," he commented. "OCT is a powerful technology, and if you can get it down to something that fits into your wrist watch, then huge opportunities open up. That needs small, low-cost, robust and simple systems; and that's exactly where we are driving OCT."