Two Earth-sized planets in the so-called Goldilocks zone are thought to be made of rocky material. 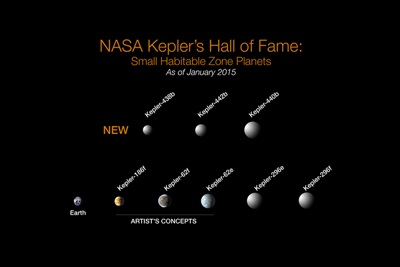 Habitable? The exoplanets most like Earth, as discovered by Kepler

Photometric data relayed from NASA’s Kepler Space Telescope have now verified the presence of 1004 exoplanets, with the latest results indicating another two worlds that are thought to be rocky and in the right kind of orbit to host liquid water.

Kepler’s instruments cannot determine the composition of any exoplanet atmospheres - spectroscopic equipment that will be able to do that is in development for future missions – but NASA says that the probe continues to deliver valuable data despite the technical problems that have restricted its data collection to a four-year period, some of which was hampered by a broken pointing mechanism.

One of the new planets discovered is 475 light years away, and thought to have a diameter just 12 percent larger than Earth’s. Known as Kepler-438b, it orbits a star in the constellation of Lyra.

Its host star is much dimmer than our own sun, but because Kepler-438b is in a much closer orbit – a “year” lasts a mere 35 days – the planet is reckoned to be within the so-called “Goldilocks” or “habitable” zone, where water could be present in liquid form.

According to the Kepler mission’s public data set, NASA’s scientists estimate the temperature on this exoplanet at 273 Kelvin – the freezing point of water on Earth.

The second "new" planet, Kepler-442b, has a diameter 33 per cent larger than Earth’s. It orbits its star once every 112 days, and at only 260 Kelvin is a little cooler. Both these planets are considered “likely” to be made up of rocky material, although that is only inferred from estimates of their mass and size rather than detected directly.

A third planet newly discovered to be in the habitable zone is Kepler 440-b, but it is not thought to be rocky. It is estimated to be nearly twice the diameter of Earth and to have a distinctly chilly surface temperature of 201 Kelvin, cold enough to freeze carbon dioxide. 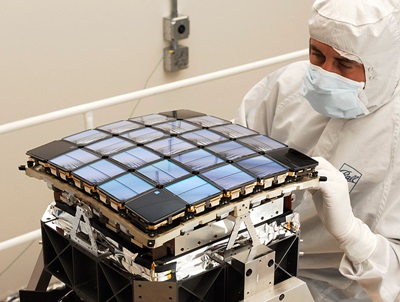 Exoplanet spectroscopy
The latest data analysis means that Kepler has now been used to identify eight planets defined as Earth-like and residing in the habitable zone. The most Earth-like of them all had previously looked to be Kepler-186f, which is only 11 per cent larger than Earth and orbits its host star once every 130 days. However, at just 179 Kelvin, it is colder than a penguin’s ice box.

Fergal Mullally, a Kepler project scientist for the SETI Institute at NASA’s Ames Research Center in California, led the analysis of the new exoplanet candidate catalog. He said: “We’re closer than we’ve ever been to finding Earth twins around other sun-like stars. These are the planets we’re looking for.”

Now, the Kepler team is trying to work out how often it is that exoplanets turn out to be both Earth-like and in the habitable zone of stars like the sun, with Mullally’s colleague Doug Caldwell saying: “The day is on the horizon when we’ll know how common temperate, rocky planets like Earth are.”

In the more immediate future, they will be trawling the final month’s worth of photometric data collected by the Kepler space telescope with a new software tool said to be more sensitive for identifying distant worlds.

But the search for extra-terrestrial life should go up a notch when future missions such as NASA’s James Webb Space Telescope are launched and more advanced ground-based telescopes are completed.

Rather than inferring the presence of a planet through a slight periodic dip in the brightness of a star as the planet transits in front, they will use state-of-the-art optical components to observe them directly. In addition, devices such as liquid-crystal gratings will be used to analyze exoplanet atmospheres spectroscopically, confirming whether or not they contain tell-tale gases indicating that life really is present beyond Earth.