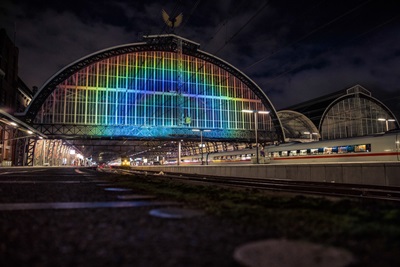 Astronomers and optics researchers have teamed up with social design laboratory Studio Roosegaarde to create a year-long “rainbow” installation now appearing each day at Amsterdam’s central station for the International Year of Light (IYL).

Meanwhile those at the traditional fireworks show in Sydney saw the IYL logo appear on the famous Harbour Bridge as part of the countdown to the new year took place. 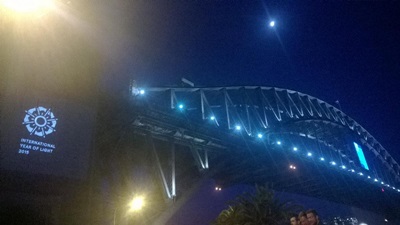 First seen last month, the 45 meter by 25 meter “Rainbow Station” installation is now in full swing and, according to IYL organizers, will appear once every day this year, representing a convergence of art and optical science.

Rather than simply projecting the image of a rainbow onto the station’s arched steel façade – as was the case with the IYL logo on the Sydney Harbour Bridge – the Amsterdam rainbow uses cutting-edge optics technology to create a genuine rainbow effect.

The key element is a liquid crystal grating of a type initially developed for exoplanet observations. It splits white light into its component colors and in the form of a curve – just like the prismatic effect of raindrops on sunlight.

These gratings are critical elements in new astronomical equipment being used to image exoplanets directly, rather than inferring their presence by measuring a dip in light intensity from the host star as the planet orbits.

Spectroscopic analysis of that light should allow scientists to tell which gases are present in exoplanet atmospheres, and therefore whether they are similar to Earth or likely to host life. 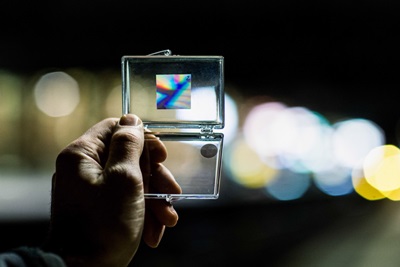 Optical efficiency
Astronomers Frans Snik and Michiel Rodenhuis from Leiden University in The Netherlands collaborated with optics expert Michael Escuti at North Carolina State University, whose group has pioneered the development of the liquid-crystal gratings.

For the Rainbow Station project they designed a modified polarization grating, described as “a kind of geometric phase hologram”, yielding a spectrum that followed the shape of the arch at Amsterdam’s central station perfectly.

Escuti says that the optical device is very efficient because it comprises multiple layers of liquid crystals, meaning that the complete optical spectrum is projected onto the station façade, with virtually none of the source white light dispersed anywhere else.

Aside from the NCSU group, Escuti is the co-founder of ImagineOptix and also completed post-doctoral research at the Eindhoven University of Technology in The Netherlands.

According to the ImagineOptix web site, the polarization grating is in effect a thin-film prism, combining the function of a hyper-efficient polarizer and a beam splitter.

It works by diffracting incident light into two output beams with opposite circular polarizations, but without any higher-order effects. The precise diffraction angle and shape of the rainbow is determined by the specific design of the film.

Aside from generating extremely realistic rainbows and high-resolution spectroscopy for astronomical equipment, the technology can be used in optical switches for telecommunications.

IYL representatives said that the Rainbow Station installation would produce a rainbow every day in 2015, just after sunset. However, it added, just like a real rainbow, each appearance is unpredictable and will last for only a few minutes.