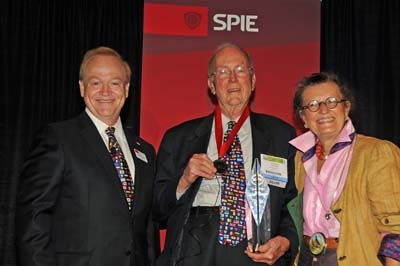 Nobel physics laureate Townes, who died January 27 at the age of 99, is universally acknowledged as a seminal figure in optics and photonics for his research that spawned the first maser and his co-invention of the laser.

But in his later work, largely at the University of California, Berkeley, Townes switched his focus to applications of photonics technology in astronomy and astrophysics research, presenting papers at a number of SPIE-organized conferences.

The trove of papers opened up by SPIE cover technologies and systems used to unlock the secrets of the universe through astronomical measurement and image modeling, and is accessible through the end of March at http://spiedigitallibrary.org/SS/Charles_Townes.aspx. SPIE is also the publisher of optics.org.

Townes shared the 1964 Nobel with Aleksandr Prokhorov and Nicolay Basov, who independently came up with the idea for a maser in Russia. The prize recognized their collective work toward the invention of the laser, with Townes awarded the greatest share.

He subsequently pioneered their application, using masers for radio astronomy and lasers for infrared astronomy and interferometry. He also promoted their use in areas as diverse as precision timekeeping – for example in atomic clocks - and extraterrestrial communication.

Using lasers, his team detected the first complex molecules in interstellar space and first measured the mass of the black hole at the center of the Milky Way galaxy. The papers made available by SPIE span more than two decades of work, including a 1993 paper on the utility of mid-infrared wavelengths to search for extra-terrestrial life.

Townes was also an SPIE Fellow, and received the SPIE Gold Medal of the Society among numerous other honors in recognition of his pioneering work.

Personal tributes
Tributes to Townes have flooded in from across the photonics community. SPIE CEO Eugene Arthurs identified his enthusiasm for talking with students, and his willingness to try anything that really inspired him:

"He had a great warmth and humility in student encounters, and was always enthusiastic about doing that at any request,” Arthurs recalled. "Along with that was his joyous approach to life. When we held our Astronomical Telescopes and Instrumentation meeting in Glasgow in 2004, and had some ceilidh dancing as a social mixer, Charles, then aged 89, was first on the floor, and last off. He certainly provided a wonderful, multifaceted image of a brilliant scientist."

Meanwhile Coherent, founded in 1966 - just six years after the first laser was demonstrated – and now one of the world’s largest laser companies, announced on its web site:

“We are saddened by the passing of Charles Townes, one of the most prominent pioneers of the last century. Professor Townes was a visionary, whose lifelong dedication to the advancement of science will remain an inspiration to us all. The laser industry has lost a true icon.”

Coherent’s CEO John Ambroseo also paid a personal tribute at the start of the company’s January 29 financial results call. He said: “I had the good fortune to meet Professor Townes a few years ago and I was struck by his humility and kindness. All of us in the photonics industry owe him thanks for enabling what we do.”