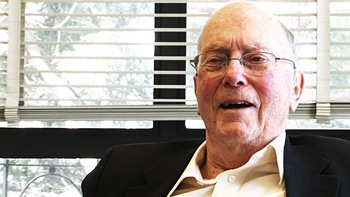 Townes at his Berkeley office

Charles Hard Townes, renowned in photonics for research that led directly to the invention of the laser, has died.

The University of California, Berkeley, where Townes was a professor emeritus of physics, said that the Nobel winner died on his way to hospital early on January 27, at the age of 99.

Until last year he had still been visiting the Berkeley campus on a daily basis, at the physics department where he had an office or at the space sciences laboratory – where he had worked for nearly 50 years on astrophysics and interferometry.

But it is as the co-inventor of the maser and laser for which Townes will be most remembered in the scientific community. In 1954, the maser (a laser operating at microwave frequencies) was independently developed by Townes and Jim Gordon, who were at Columbia University, and Nicolay Basov and Aleksandr Prokhorov in Russia.

Townes and his close friend (and brother-in-law) Arthur Schawlow then published a paper on the first optical maser, subsequently known as the laser, in 1958, before Theodore Maiman developed the first working laser – based on a ruby crystal – at Hughes Research Laboratory in 1960. 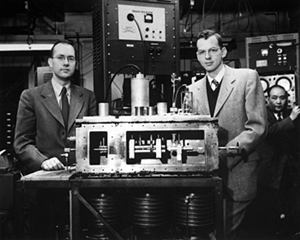 Townes went on to win a half-share of the Nobel prize for physics in 1964, shared with Basov and Prokhorov. In a 2001 interview, he recalled the “Eureka moment” that spawned the first maser, which occurred to him while sat on a park bench one morning ahead of a committee meeting.

At the time, Townes was 35 years old, and part of a project working to create a pure beam of short-wavelength, high-frequency light.

The Damascene moment for Townes was the realization that he could use molecules to produce the radiation, by separating excited and unexcited molecules and using a resonant cavity to amplify microwaves.

He told Schawlow his idea, and with his students then went on to build the first maser, based on ammonia gas, in 1954. The optical maser, subsequently known as the laser, followed shortly afterwards - and although applications were few and far between at first, it has since become ubiquitous.

Online tributes
Steven Boggs, professor and chair of the UC Berkeley Department of Physics, said in a statement from the university: “Our department and all of UC Berkeley benefited from his wisdom and vision for nearly half a century. His overwhelming dedication to science and personal commitment to remaining active in research was inspirational to all of us. Berkeley physics has lost a true icon and our deepest sympathies go out to his wife, Frances, and the entire Townes family.”

Among those to pay tribute was John Dudley, chairman of the steering committee for the International Year of Light (IYL). He tweeted “Charles Townes was a giant and an inspiration!”, linking to a video where Townes offered his support for the year-long IYL celebrations (see below).

Charles Hard Townes is survived by his wife, Frances Hildreth Townes, whom he married in 1941; daughters Holly Townes, Linda Rosenwein, Ellen Townes-Anderson and Carla Kessler; six grandchildren, two great grandchildren and a scientific legacy that has had a huge and still-growing beneficial impact on society.

Charles Townes' support for the International Year of Light: