Enabling all-back-contact solar cells to be made at lower cost than conventional cells. 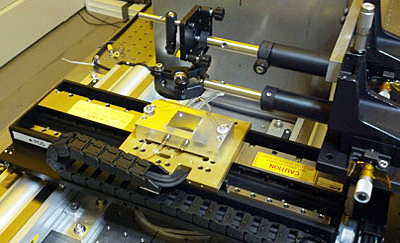 Natcore laser system; the infrared beam appears as a white spot to the camera.

In October, 2014, Natcore Technology, Red Bank, NJ, USA, announced that its scientists had created an all-low-temperature, laser-processed solar cell. Now Natcore's scientists have progressed further, with a development which, they say, promises not only to slash production costs, but also add significantly greater power output to commercial solar cells.

Working in their R&D Center in Rochester, NY, the Natcore team has successfully used their proprietary advances in laser technology to produce an all-low-temperature laser-doped solar cell with all of its electrical contacts on the back of the cell.

Eliminating the contacts from the front of the cell will allow an additional 4% to 6% more light to enter the cell and increase its output by a comparable amount. This increase along with other expected gains can increase efficiencies by up to 4% on an absolute basis.

Moreover, in their latest effort the Natcore team has achieved an open-circuit voltage of 0.6 V. These and other performance metrics indicate that, with further refinement, efficiencies significantly equaling or exceeding today's best commercial cells are possible.

While other all-back-contact cells have been produced, they use high-temperature diffusion in their doping steps and highly complex multi-step patterning processes to apply the electrical contacts. Natcore's all-back-contact cell, on the other hand, uses only high-speed, inexpensive laser processing to define the doping regions and the contacts.

Natcore's elegantly simple approach makes it uniquely suited to large-scale manufacturing. It will provide the best of all worlds by allowing high-performance all-back contact cells to be manufactured at a much lower cost than current or conventional solar cells. 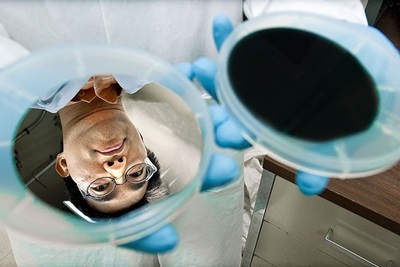 Natcore's black silicon technology is licensed to the US National Renewable Energy Lab.

The all-back-contact cell is the latest achievement in Natcore's mission to cut the costs of solar cell manufacturing. Previous developments include:

"We're at a real frontier," says Dr. David Levy, Natcore's Director of Research & Technology. "We're changing the way solar cells are made. We're very optimistic about our prospects because our cells are behaving according to our theoretical expectations.”

Chuck Provini, Natcore's president and CEO, commented, “With every advance, we're further defining what will be recognized as the 'Natcore Process,' Ultimately our process will yield superlative solar cells that are highly efficient, inexpensive to produce, and kind to the environment."

Brien Lundin, Natcore's Chairman, added, “The key to making solar energy competitive without government subsidies is to slash production costs and increase power output. This latest advance in laser processing does both, and to a greater degree than even we thought possible. This is our first application that is both disruptive and ready for market."

The next steps in the development will be to add Natcore's black silicon antireflection control technology to the front of the cell. Natcore will have a unique and proprietary position with this technology.