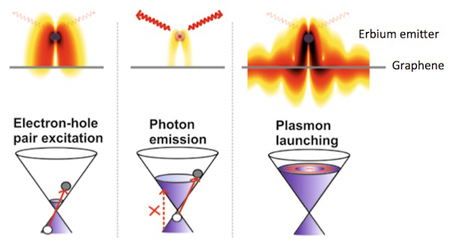 Controlled energy flow from electrons into photons and plasmons.

Lasers, computer displays and similar devices emit photons, and modulation of these particles is critical in most optoelectronic applications. Electrical control of light emission pathways makes possible devices based on so-called active plasmonics, in which information transfer in nanoscale structures exploits electron oscillations at the interfaces between materials.

Now scientists from Europe’s Graphene Flagship have demonstrated active, in-situ electrical control of energy flow from erbium ions into photons and surface plasmons. In the experiment, erbium emitters are placed a few tens of nanometers away from a graphene sheet, the charge carrier density of which is electrically controlled.

Results from the study led by researchers at the Institute of Photonic Sciences (ICFO) in Barcelona, Spain, and the Donostia-based graphene manufacturer Graphenea, have been published in Nature Physics.

Erbium ions are commonly used in optical amplifiers, emitting light at the near-infrared wavelength of 1.5µm. This wavelength is in an important band for optical telecommunications because there is very little energy loss in the range, and thus an efficient transmission of information.

In the Nature Physics paper, the lead author of which is Klaas-Jan Tielrooij, the researchers show that energy flow from erbium into photons or plasmons can be controlled by applying a small voltage between the erbium and graphene layers. Surface plasmons in graphene are strongly confined, with a plasmon wavelength two orders of magnitude smaller than the wavelength of emitted photons. As the charge carrier density of the graphene sheet is gradually increased, the erbium ions shift from exciting electrons in the graphene sheet to emitting photons or plasmons.

The paper’s abstract states, “Controlling the energy flow processes and the associated energy relaxation rates of a light emitter is of fundamental interest and has many applications in the fields of quantum optics, photovoltaics, photodetection, biosensing and light emission.

”Advanced dielectric, semiconductor and metallic systems have been developed to tailor the interaction between an emitter and its environment. However, active control of the energy flow from an emitter into optical, electronic or plasmonic excitations has remained challenging. Here, [the researchers] demonstrate in situ electrical control of the relaxation pathways of excited erbium ions, which emit light at the technologically relevant telecommunication wavelength of 1.5μm."

The scientists say that their experiments reveal long sought-after graphene plasmons at the near-infrared frequencies used in telecommunications applications. In addition, the strong concentration of optical energy observed offers new possibilities for data storage and manipulation through active plasmonic networks.

ICFO quantum nano-optoelectronics group leader and study co-author Frank Koppens said, “This work shows that electrical control of light at the nanometer scale is possible and efficient, thanks to the optoelectronics properties of grapheme.”

Commenting on the role of the Graphene Flagship, Koppens added, “The Graphene Flagship is an excellent platform for collaborative efforts on complex projects. It fosters the exchange of ideas, materials and devices, and at the same provides a path forward for the realisation of practical applications.”