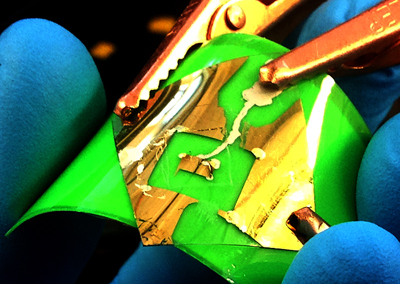 2D “designer materials” based on graphene.

Researchers at the universities of Manchester and Sheffield have shown that new 2D “designer materials” based on graphene can lead to the creation of flexible, semi-transparent and more efficient electronic devices.

The team, led by Nobel Laureate Sir Kostya Novoselov, made the breakthrough by creating LEDs, which were engineered on an atomic level. The work has just been published in Nature Materials.

The group says its research shows that graphene and related 2D materials could be utilised to create light emitting devices for the next-generation of mobile phones, tablets and televisions to make them “incredibly thin, flexible, durable and even semi-transparent”.

The LED device was constructed by combining different 2D crystals and it emits light from across its whole surface. Being so thin, at only 10-40 atoms thick, these new components can form the basis of the first generation of semi-transparent smart devices.

One-atom thick graphene was first isolated and explored in 2004 at The University of Manchester. Its potential uses are vast but one of the first areas in which products are likely to be seen is in electronics. Other 2D materials, such as boron nitiride and molybdenum disulphide, have since been discovered opening up vast new areas of research and applications possibilities.

By building heterostructures – stacked layers of various 2D materials – to create bespoke functionality and introducing quantum wells to control the movement of electrons, new possibilities for graphene based optoelectronics have now been realized. 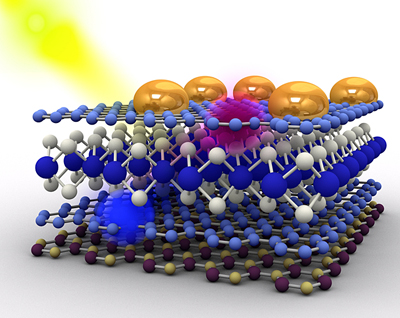 Heterostructures based on 2D atomic crystals for photovoltaic applications.

Freddie Withers, Royal Academy of Engineering Research Fellow at The University of Manchester, who led the production of the devices, said, “As our new type of LEDs only consist of a few atomic layers of 2D materials they are flexible and transparent. We envisage a new generation of optoelectronic devices to stem from this work, from simple transparent lighting and lasers and to more complex applications.”

Explaining the creation of the LED device, Sir Kostya Novoselov said, “By preparing the heterostructures on elastic and transparent substrates, we show that they can provide the basis for flexible and semi-transparent electronics.

"The range of functionalities for the demonstrated heterostructures is expected to grow further on increasing the number of available 2D crystals and improving their electronic quality.”

Prof Alexander Tartakovskii, from The University of Sheffield added: "The novel LED structures are robust and show no significant change in performance over many weeks of measurements. “Despite the early days in the raw materials manufacture, the quantum efficiency (photons emitted per electron injected) is already comparable to organic LEDs.” 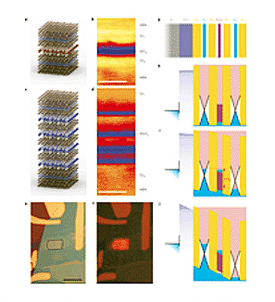 Heterostructure devices with a SQW and MQWs.

The Nature Materials article abstract states, “We take the complexity and functionality of these van der Waals heterostructures to the next level by introducing quantum wells engineered with one atomic plane precision.

"We have described LEDs made by stacking metallic graphene, insulating hexagonal boron nitride and various semiconducting monolayers into complex but carefully designed sequences. Our first devices already exhibit an extrinsic quantum efficiency of nearly 10% and the emission can be tuned over a wide range of frequencies by appropriately choosing and combining 2D semiconductors.

"By preparing the heterostructures on elastic and transparent substrates, we show that they can also provide the basis for flexible and semi-transparent electronics. The range of functionalities for the demonstrated heterostructures is expected to grow further on increasing the number of available 2D crystals and improving their electronic quality.”