ASML finishes year on a high 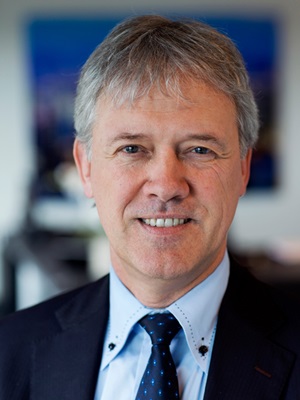 “It’s our best year ever for sales and our second-best year ever for profit,” Wennink said, after ASML beat expectations in the closing quarter of 2014 thanks to strong demand from makers of memory chips. At just under €1.2 billion, the company’s net income for the year was up 18 per cent on 2013.

This year looks to be off to a good start too, with Wennink and his team expecting another rise in sales to €1.6 billion in the opening quarter. He says that foundries producing logic chips are in the middle of one of the most aggressive ramps in production ASML has ever seen.

Thanks largely to the continued rise in demand for connected devices, production of chips featuring 28 nm “node” process technology is still rising - while the first devices made using improved 20 nm processes are now starting to appear in the latest smart phones.

Meanwhile chip makers are planning to ramp production of new “FinFET” vertical transistors this year. The logic devices are capable of more energy-efficient processing than traditional horizontal device designs, and their vertical nature translates into additional demand for lithography equipment.

Internet of Things
Wennink said that the recent Consumer Electronics Show (CES) in Las Vegas, with its heavy emphasis on the so-called “Internet of Things” and wearable technologies, confirmed that demand for logic and memory chips would continue to grow unabated.

Asked what exactly the Internet of Things buzzword meant for ASML, the CEO said that by 2017 it is expected that 8-9 billion devices will be connected to the web. As well as chips needed for the devices themselves, there is a knock-on effect in terms of additional data storage and network infrastructure requirements – meaning more chips, along with more efficient energy performance.

“This is going to drive the industry for the next ten years,” said Wennink, who is targeting annual revenues of €10 billion for ASML by 2020. By that time, extreme ultraviolet (EUV) lithography should have come to the fore. The CEO reiterated ASML’s belief that EUV technology was here to stay, pointing to the recent order of two production tools by key foundry customer TSMC as evidence for the growing confidence in the technology.

And the CEO also played down any significance in the news last week that TSMC is set to sell the $1.5 billion shareholding in ASML that it acquired back in August 2012. “The TSMC relationship is stronger than ever,” Wennink said, adding that the foundry company’s ongoing commitment to help fund a five-year research and development program was more important than the shareholding.

EUV targets
ASML’s NXE:3350B EUV tools are slated to go into full volume production at TSMC in 2017, following further improvements to the laser-produced EUV light source at the heart of the equipment.

So far multiple customers, including TSMC and IBM, have demonstrated that the new tool can produce 500 wafers per hour with good reliability over multiple days. Wennink stressed that ASML’s development focus for EUV this year would be on improved availability of the tool – meaning more reliable and production-worthy performance rather than simply increasing raw power.

He said that current availability was around the 50 per cent mark, and that the target was to improve that to 70 per cent this year and ultimately to 90 per cent for 2017. "Everything looks good," he added.

The CEO highlighted three specific areas of development needed for the source, where EUV light is generated by firing a high-power carbon dioxide laser at a stream of tin droplets in a vacuum.

They include better lifetime of the EUV mirror collector component, plus improved reliability of both the droplet generator and the seed laser.