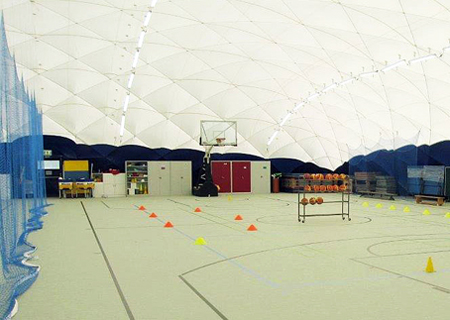 Paranet's airdromes have many uses in community, construction or commercial fields.

Heliatek, a leading developer of organic photovoltaics, has installed its HeliaFilm solar converting film on a PVC-based membrane air dome in Berlin, Germany. The developer says this achievement opens up a new area of application for BIOPV, building on the company's previous successes with glass and concrete substrates.

The project was implemented together with Paranet Germany, a developer of air domes. Paranet produces the domes for sporting activities, events or emergency accommodation. Dome sizes range from 18m x 18m through 200m x 100m.

The HeliaFilm is affixed to the dome with an integrated mounting on the outer shell over 50 m2, in 2m x 2m squares. With a total electrical output of 1.4 kWp, the pilot project is expected to provide about 5% of the typical annual energy demand of the air dome.

Heliatek says the long-term goal of the cooperation is the ability to set up air domes without any external power supply. Next steps will be the extension of the covered area on the air dome, adding energy storage devices and appropriate control systems. To be totally energy self-sufficient, an air dome might require only a quarter of the totally available surface area covered with Heliafilm.

HeliaFilm is suited to this application because it is lightweight, flexible and effective at harvesting solar energy under real world conditions. Compared to standard solar technology the film from Heliatek is less susceptible to temperature changes and orientation to the sun.

Jürgen Wowra, managing director of Paranet Germany commented, "With Heliatek's solar films, we will finally be able to offer our customers energy self-sufficient air domes in the future. We are really pleased about the realization of the first project in Berlin together with Heliatek."

Combined with HeliaFilms, Paranet air domes will be energy self-sufficient to a large degree and thus make these air dome into a potentially self-sustaining. The market launch is planned for 2016. With Paranet Germany, Heliatek is extending its network of renowned industry partners to the area of PVC membrane, thus strengthening the company’s position as a leading manufacturer of solar film.

Dr. Thomas Bickl, Heliatek's VP Sales & Business Development, said, "The addition of PVC membrane to our material portfolio is a major step in implementing Heliatek´s marketing strategy. After the successful market start of HeliaFilm with building materials such as glass and concrete in 2014, we can now serve the PVC membrane segment with Paranet as a partner."

On show - this week

Heliatek will present the variety of applications at the trade show BAU (January 19-24, 2015) in Munich, Germany, on their booth 241, hall B2. BAU claims to be the world´s leading trade show for architecture, materials and systems.

Power structure: in the pilot, the PVC membrane is covered with HeliaFilm.