Adding a perovskite layer to silicon cells promises a quicker route to market for UK-based Oxford PV and others. 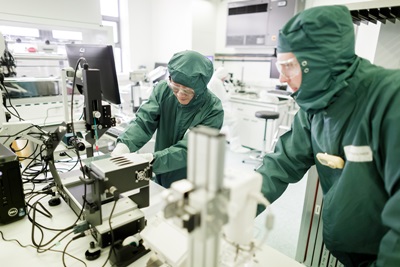 Seeking to boost conversion efficiencies by a fifth, the UK-based start-up is now raising funds in part to establish a development center in California, where its partners are based.

“The best a silicon panel supplier can do is improve their technology a few tenths of a percent at a time,” Case told optics.org. “[But by] stacking a perovskite material on top it’s easy to envision boosting a silicon cell that might be 20 per cent to 24 per cent, or from 25 per cent to 29 per cent. That’s why it’s getting hugely enthusiastic interest from the silicon side.”

Oxford PV’s partners are manufacturers of high-performance cells that sandwich n-type silicon between two pieces of glass. They want to harness the versatility and remarkable semiconductor properties of lead halide perovskites, whose cell efficiencies have surged from 3.8 per cent to 17.9 per cent in just five years.

“It’s incredibly easy to produce 15 per cent cell efficiency with this material, by far the easiest of any PV material identified so far,” comments Martin Green, the highly regarded and oft-cited PV researcher from Sydney, Australia’s University of New South Wales.

Though Green has co-authored a paper on the emergence of perovskites with Henry Snaith, the University of Oxford researcher who founded Oxford PV, he’s otherwise unconnected with the company. 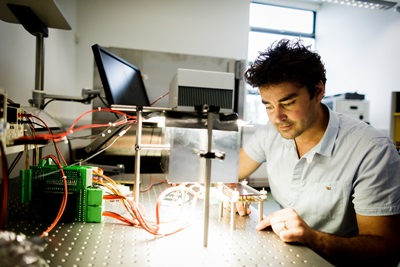 Tandem race
Case highlights that his company’s simple solution coating process can make a perovskite layer that absorbs the UV wavelengths inaccessible to silicon, and at minimal cost. “The glass is already paid for, so you’re only adding the incremental cost of the raw perovskite solar absorber embedded into the last bits of the processing line before the cells get laminated,” he explains.

However, Green stresses that because the photovoltaic material accounts for such a small proportion of the overall panel cost, this promise of lower deposition cost doesn’t present a huge advantage.

Rather, he sees cell efficiency enhancement through the tandem cell strategy as the area with greatest potential. Consequently, he too is exploring the approach, in collaboration with other academic groups in Australia and one of China’s largest cell manufacturers in Trina Solar.

So far, Oxford PV’s approach has only been used to make test tandem structures, but the firm is planning a formal demonstration at the end of this year. With its partners, it will then produce prototypes combining perovskite materials with standard silicon panels by the end of 2015.

The partners’ role will be critical, as the start-up’s business model is to develop and license technologies, rather than to manufacture panels itself.

“Funding to get large equipment and demonstration facilities in PV is toxic, especially on the west coast of the US, after the debacle with Solyndra where a billion or more dollars went down the drain,” Case says. “You can barely get a venture capitalist to talk to you if you mention PV, so we’re not going to make that mistake.” 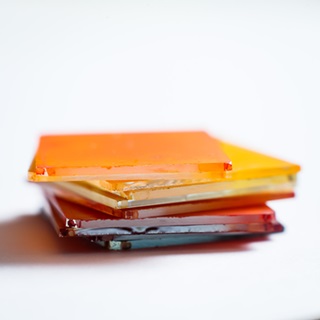 Extra opportunity
Despite that environment, money for a licensing strategy has been forthcoming. Oxford PV has raised £6 million ($10 million) of external funding so far, and another £1.2 million in UK government grants. It is set to close the first of two £7.5 million tranches in its £15 million total B-round of venture funding at the end of November.

Case reveals that existing shareholders have already confirmed that they’ll take the opportunity to reinvest, while Oxford PV has had “expressions of interest from a more global list”. Beyond its new California operations, the money will help increase the company’s headcount from around 30 to 54, pay for equipment and patenting more of its innovations.

Case highlights that tandem cells are an extra, near-term market opportunity on top of the initial idea that Oxford PV started out with: tinted windows that double as solar cells. Slated for production by licensees in 2017, the company had always expected that such building-integrated photovoltaics (BIPV) would take a long time to get to market.

“We need buy-in from architects, builders, regulators, glazing companies, connecting companies and inverter companies, because it’s all non-standard product,” the executive says. “We have those partners in play but it takes time. We saw a near-term, even bigger initial market opportunity for the tandem product.”

This shift in application reflects the extreme youth of perovskite technology, which also brings concerns over potential pitfalls. Two of these - the presence of lead and sensitivity to moisture - are in fact related.

Lead, though toxic, is widely used in batteries and on roofs. But because perovskites are water-soluble, there’s theoretically a direct route for them to enter the environment.

However, Green says that the material’s stability is the key near-term issue. “Five per cent of the present PV market is serviced by cadmium which is far more toxic,” he points out, referring to First Solar’s widely deployed cadmium telluride technology. 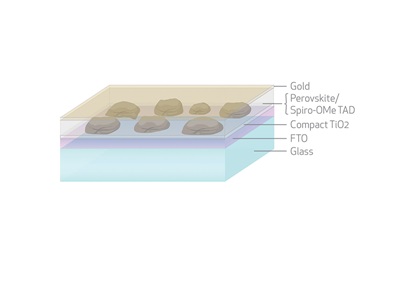 Ally today, adversary tomorrow?
Dissolving solar panels would be disastrous, Case admits. “From a reliability standpoint moisture could be a killer,” he says. “The highest performance lamination is required for this product. But OLED TVs are all filled with polymeric dye materials that have lots of degradation mechanisms, yet they now last for ten years.

“How is that done? By putting them between layers of glass and sealing them very well.” As well as keeping the water out, effective encapuslation would also help ensure that the lead stays in, reducing environmental concerns.

Another potential issue is hysteresis. It can cause a “burn-in” effect, where cell efficiency falls under initial exposure to sunlight. “Hysteresis, in my opinion, would be a commercial disaster,” says Case. “We’re targeting no more than a 10 per cent drop in power. But I can tell you it’s a solvable problem and we believe we have a solution, which we’re not describing yet, although we will.”

If Oxford PV can overcome such concerns, its “grand scheme” is to push perovskites further than either BIPV or teaming up with silicon partners on tandem cells would be able to take them.

“Perovskite-on-perovskite tandems model 39 per cent efficiency,” Case noted. “We’re not trying to displace silicon today, we’re trying to help it. But the long-term vision is that it could easily displace silicon because its potential performance is higher.”

Andy Extance is a freelance writer based in Exeter, UK.