Roadmap suggests PV could be delivering 16% and solar thermal 11% of the world’s electricity 35 years from now.

Given the right policy frameworks and technology developments, solar technologies could be generating more than a quarter of the world’s electricity by 2050.

That potential scenario, which would see solar overtake wind, hydroelectric, nuclear and even fossil fuels as the leading source of electricity, is mapped out in two reports published this week by the Paris-headquartered International Energy Agency (IEA).

Stressing that its roadmaps represent the potential for solar to reduce carbon dioxide emissions rather than a forecast, the IEA says that solar photovoltaics could deliver 16 per cent of global electricity, with another 11 per cent from solar thermal sources.

The agency highlights the complementary nature of PV and thermal technologies, but also the way that PV deployments have outstripped those of solar thermal dramatically in recent years. 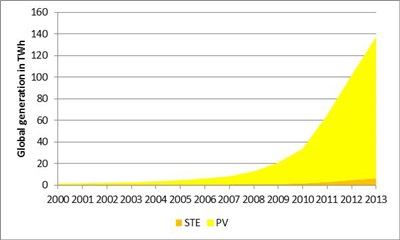 Rapid PV deployment
Thanks to recent rapid reductions in the price of PV panels, along with a variety of subsidy programs around the world, some 137 GW of PV capacity had been installed globally at the end of 2013 – with another 100 MW being added every day.

“PV deployment so far has been much faster than that of [solar thermal], mainly thanks to massive cost reductions,” reports IEA. Under the scenario described in its roadmaps, most of the growth of solar electricity over the next 15 years comes from additional PV until 2030.

“However, the picture changes afterwards,” it says. “When reaching shares between 5 per cent and 15 per cent of annual electricity generation, PV starts to lose value in wholesale markets.”

On the other hand, that is when the benefits of “massive-scale” solar thermal deployments would take off - thanks to the inherent storage capability of the technology, which allows electricity generation when demand peaks in the late afternoon and in the evening.

“First, energy efficiency must significantly reduce energy demand,” she said. “Second, renewables must ramp up to 65 per cent of global electricity production along with a significant expansion of nuclear power and carbon capture and storage.”

However, if the expansion of nuclear power generation is limited – as seems likely given political moves in Germany and Japan - and carbon capture does not live up to expectations, renewables would be required to generate up to 80 per cent of global electricity.

And while admitting that such a transition currently appears “immense”, van der Hoeven said that in reality the necessary investment in clean energies would represent a relatively small proportion of global GDP. 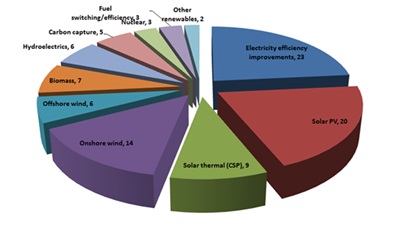 Why solar thermal lags PV
She also reported that PV was already outstripping the IEA’s 2010 roadmap for the technology, when it set an ambitious (for the time) benchmark of 200 GW in cumulative world capacity deployments by 2020.

“This goal will already be reached by next year, five years earlier than previously thought,” said van der Hoeven. Meanwhile the original milestone of 140 GW that was set for solar thermal is way behind schedule, and currently looks like it will not be reached for at least another decade.

The reason for the failure of solar thermal – only 4 GW is deployed currently – is that it has found itself in direct competition with both PV and, in the US at least, the revolution in shale gas.

However, from 2030 onwards, van der Hoeven and the IEA believe that solar thermal deployments will really start to take off, exploiting the key advantage of thermal storage, which is much cheaper than storing electrical charge.

“It is the combination of PV and STE that could make sunshine the largest source of electricity globally by 2050 or even before, accounting for 27% of total world electricity generation,” she said.

“This is not a forecast,” van der Hoeven again stressed. “It is not what will happen, but rather what should happen if nuclear power and CCS cannot be deployed on a massive scale and we are serious about limiting climate change.”

Clear signals needed
She recommends that policymakers set or update their long-term targets for solar deployments, taking full account of both recent cost reductions and the potential for further cuts – partly through increased PV panel conversion efficiencies – in the future.

But solar must also become more directly exposed to energy markets, rather than dependent on simple subsidies. And that could be done partly by introducing innovations such as different remuneration for energy generation during periods of peak demand. Van der Hoeven highlighted that this approach has recently been introduced in South Africa.

“Most importantly, de-risking financing should become a key policy priority,” she added, highlighting the capital-intensive nature of both solar technologies, which demand a much greater relative up-front investment compared with fossil fuels.

“Almost all expenditures are made upfront. Lowering the cost of capital is thus of primary importance for achieving the vision in these roadmaps.”

“By contrast, where there is a record of policy incoherence, confusing signals or stop-and-go policy cycles, investors end up paying more for their investment, consumers pay more for their energy, and some planned projects simply will not go ahead.”