Instrument to use near-infrared spectroscopy and fiber-optics to create an intergalactic star map. 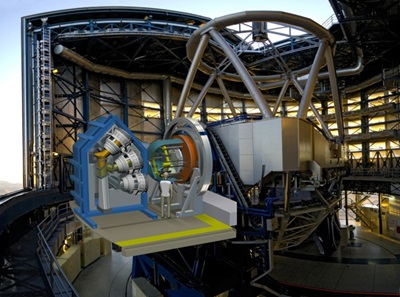 A multinational team led by the UK’s Astronomy Technology Centre (ATC) in Edinburgh has won a €9 million contract to build a new spectrograph for the European Southern Observatory’s Very Large Telescope (VLT) in Chile.

Featuring engineers and scientists from France, Italy, Portugal and Switzerland – as well as the UK and Chile – the “multi-object optical and near-infrared spectrograph” (MOONS) project is aiming to build an instrument designed to reveal previously unseen details of the Milky Way galaxy.

The kit is set to tackle some of the most compelling astronomical puzzles, says the team, such as how stars and galaxies form and evolve. It will also probe the structure of the Earth’s galactic back yard, creating a three-dimensional map of it.

Gillian Wright, director of the ATC, said: “The team at UK ATC in Scotland have an opportunity with this project to enable all of us to understand why the Milky Way looks the way it does. This instrument will act as an ‘intergalactic GPS’ to help us to navigate through the billions of stars in our galaxy and create a comprehensive map of its structure.”

Conceived at the Edinburgh institution, MOONS is scheduled to become operational by 2019, and the €9 million hardware cost will make up a large chunk of the overall project budget of around €23 million.

As well as managing the multinational consortium, ATC will also work on the design of some key components needed to produce an instrument operating from 800 nm to 1.8 µm and featuring three individual spectrometers.

According to the instrument description published by the Royal Observatory, Edinburgh, the spectrograph will feature sensors from Teledyne Imaging and UK-based e2v technologies to cover the three different wavelength regions being collected.

Multiplexed data collection
One novel element of MOONS will be its ability to observe 1000 objects simultaneously - effectively multiplexing data collection by using fiber-optic cables to feed the collected photons. That will enable the instrument to survey large samples of objects much more quickly than is possible with current technology.

“Each of the 1000-plus fibres will have to move into position very quickly, with great accuracy and without colliding with each other,” says ATC, adding that UK expertise in precision optics will be a key aspect of the project.

The most innovative components of the instrument are said to be the individual motorized systems that will move each fiber into position rapidly, while collaborators at the University of Cambridge will develop the high-performance cameras required to meet the project’s goals.

ATC’s Michele Cirasuolo, the principal investigator, said in a statement: “MOONS is a unique instrument able to pioneer a wide range of galactic, extragalactic and cosmological studies and provide crucial follow-up for major facilities such as Gaia, the Visible and Infrared Survey Telescope for Astronomy (VISTA), Euclid and the Large Synoptic Survey Telescope (LSST).”

Roberto Maiolino from the University of Cambridge, which will also design and assemble optical subsystems for the project, added: “MOONS will vastly expand our knowledge of the mechanisms responsible for galaxy evolution across the life of the universe. It will be possible to characterize the properties of millions of distant galaxies – for instance, by identifying the signatures of ongoing star formation and black hole accretion – and how galaxies’ evolution depends on their large-scale environment.”

Once operational, the MOONS kit is expected to deliver the most sophisticated survey of the center of the Milky Way ever made, and to look at “ultra-distant” galaxies to reveal details of their early evolution.

• For a complete description of the MOONS spectrograph, see the various SPIE papers listed here.