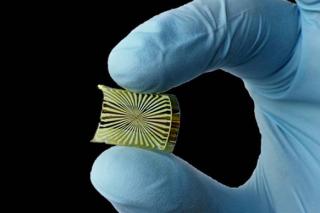 Manufacturing some of the key elements involved in artificial retinal implants from graphene could improve the performance and utility of such devices, as well as providing further proof of the versatility of the material in biomedical applications.

A project investigating the topic and led by researchers at the Walter Schottky Institut of the Technische Universität München (TUM) has now been selected to receive financial support from the Graphene Flagship initiative, folding its work into one of the EU's largest coordinated research endeavors.

"The Graphene Flagship was initially focused on flexible electronics, optoelectonics and material production; but less so on biomedical applications," commented Jose A. Garrido of TUM. "Recently that was widened to call for proposals in biomedical fields, and our project was one of those selected. The Flagship recognizes the large potential of graphene materials for biosensors as well as for other uses such as drug delivery, so there is an interest in building new activities in these areas."

Retinal implants might be one area where the material makes a significant impact. TUM, in collaboration with partners from the Institut de la Vision at Université Pierre et Marie Curie/INSERM/CNRS in Paris and the French company Pixium Vision, has set about manufacturing some key components of an artificial retina from graphene.

The material's appeal derives from the ability of special field-effect transistors built around graphene to operate within organic tissues, using electrochemical changes within the tissue itself to provide the "gate" function for the transistor - a job more normally carried out by an applied external voltage.

This principle could get around the problems encountered when applying traditional transistor materials to the task of operating in biomedical contexts, where complications arising from oxide formation, high stiffness and other difficulties have proven problematic. Silicon-based structures, for example, misbehave electronically when thinned enough to be considered in the same scenarios.

Graphene, on the other hand, is chemically stable enough to operate when surrounded by body fluids, and retains its desirable electronic properties of low noise and high sensitivity.

"A lot of work has been done on organic semiconductors, but they do not exhibit the same performance and their noise behavior is very different," noted Garrido. "Carbon nanotubes are another material that has been considered in the past, but they could pose potential risks for the body, and the exact health effects of nanoparticles are of general concern. Graphene does not have these problems."

The former are placed within the inner surface of the retina, from where they directly stimulate the innermost ganglion cells and bypass the retina's other layers. The latter sit at the level of the photoreceptor cells, to make full use of those inner and middle retinal layers that remain correctly functioning in conditions such as retinitis pigmentosa.

TUM sees its graphene-based circuitry as playing a complementary role to existing implant technologies by improving the sensor capabilities of the implant, whichever stimulation strategy then follows.

"The concepts behind current retinal implants involve stimulation, but in current commercial devices there are no clear ways to control or tune that stimulation, or to tell when there is too much or too little of it," said Garrido. "We would like to implement sensors based on graphene to control the stimulation, complementing rather than challenging the existing concepts."

One factor in the idea's favor is that the fabrication techniques envisaged for the graphene sensors should be nicely compatible with the current methods used to manufacture the stimulating electrodes.

Clinical trials for use in humans may still be some way off, but the TUM team anticipates that its links with Pixium and Institut de la Vision will facilitate those tests when the time is right. For now the team is continuing to test the technology, and determine what the limits of its applications might be.

Onboard the flagship
The Graphene Flagship, created in 2013, is said to be the largest research initiative ever undertaken by the EU, with a budget of one billion Euros and the goal of taking graphene out of the laboratory and into European society within ten years. It forms one of a pair of large-scale applied research projects currently backed by the EU, the other being the Human Brain Project.

The potential impact of graphene on several sectors is reflected in the Flagship's expansion, with TUM being one of 66 partners recently brought under the program's overall umbrella.

"We can readily imagine many different applications for graphene," commented Garrido. "Its properties make it very suitable for development into cortical implants demonstrating desirable sensitivity and stimulation capabilities, potentially used to control artificial limbs or other prostheses. And of course there are many activities within the Graphene Flagship relating directly to optoelectronics, which is another very active field of research."