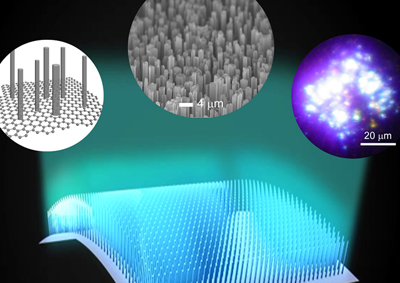 Flexible LED displays and “bendy” solar cells based on inorganic compound semiconductor micro-rods are now one step closer to reality – thanks to graphene, says a team of researchers based in Korea.

Currently, most flexible electronics and optoelectronics devices are made from organic materials. But inorganic compound semiconductors such as gallium nitride (GaN) can provide advantages over organic materials for use in these devices, including superior optical, electrical and mechanical properties. One major obstacle that has so far prevented the use of inorganic compound semiconductors in these applications has been the difficulty of growing them on flexible substrates.

Now a team of researchers from Seoul National University, Korea, led by Professor Gyu-Chul Yi have grown GaN micro-rods on graphene to create transferrable LEDs and enable the fabrication of bendable and stretchable devices. Their work is described in the latest issue of APL Materials.

Prof. Yi explained, “GaN microstructures and nanostructures are attracting attention within the research community as light-emitting devices because of their variable-color light emission and high-density integration properties. When combined with graphene substrates, these microstructures also show excellent tolerance for mechanical deformation.” 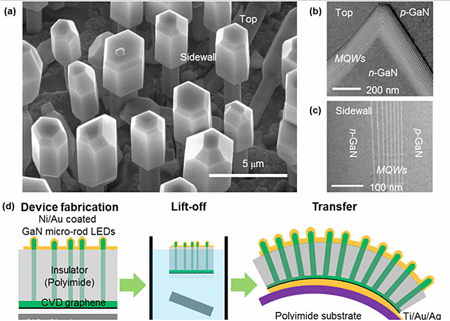 Ultrathin graphene films consist of weakly-bonded layers of hexagonally-arranged carbon atoms connected by strong covalent bonds. This makes graphene an ideal substrate "because it provides the desired flexibility with excellent mechanical strength and it's also chemically and physically stable at temperatures above 1,000°C,” Yi said.

He added that it is important to note that for GaN micro-rod growth, the stable and relatively inactive surface of graphene offers a small number of nucleation sites for GaN growth, which would enhance three-dimensional “island growth” of GaN micro-rods. To create the actual GaN microstructure LEDs on the graphene substrates, the SNU team uses a catalyst-free metal-organic chemical vapor deposition process they developed as early as 2002.

"Among the technique's key conditions, it is necessary to maintain high crystallinity, control over doping, formation of heterostructures and quantum structures, and vertically-aligned growth onto underlying substrates," Yi commented.

When the team put the bendability and reliability of GaN micro-rod LEDs fabricated on graphene to the test, they found that the resulting flexible LEDs showed intense electroluminescence and were reliable - there was no significant degradation in optical performance after 1,000 bending cycles," noted Kunook Chung, the article's lead author and a graduate student in SNU's Physics Department.

”We grew coaxial In GaN MQW heterostructures to form LEDs, and transferred the structures to a polymer substrate. The resulting flexible LEDs exhibited intense electroluminescence, and were reliable, with no significant degradation in the optical performance following 1000 bending cycles.