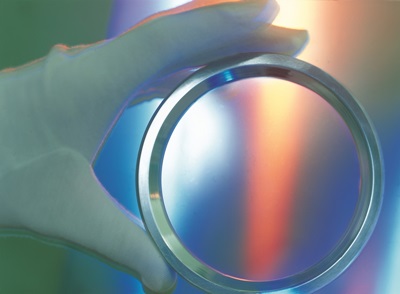 A thin-disk Ti:sapphire laser under development through a European research project will use a synthetic diamond heat sink from Element Six to improve the thermal performance of the gain medium.

The diamond specialist and De Beers subsidiary has been selected by a European consortium featuring the University of Stuttgart – the German institution where the thin-disk laser first emerged in Adolf Giesen’s research group – as well as Centre National de la Recherche Scientifique (CNRS) and Thales Optronique in France and the UK firms Oxford Lasers and M-Squared Lasers.

They are working on two systems with the aim of combining femtosecond-scale pulses, which are ideal for so-called “cold ablation”, where there is no damaging heat transferred to target materials, with the kind of high average powers needed for industrial applications.

Ti:sapphire crystals, which have a very broad emission bandwidth and are thus ideal for producing such ultrashort pulses, have long been used in the laboratory, but the material’s relatively poor thermal performance means that it has been unable to cross over into the industrial realm.

But the team working under the three year, €3.1 million project entitled “Ultrafast High-Average Power Ti:Sapphire Thin-Disk Oscillators and Amplifiers” believes that combining synthetic diamond with the laser gain medium will provide the best of both worlds.

“The main objective of the project is to demonstrate the feasibility of industrial high-average power ultrafast Ti:sapphire lasers and their excellent qualification for demanding high-productivity precision laser material processing applications,” states the project proposal.

Unique combination
Stuttgart’s Andreas Voss, the project's principal investigator, said in an Element Six release: "The low-loss single crystal CVD diamond material produced by Element Six offers a unique combination of properties — including the highest room temperature thermal conductivity of any bulk material — allowing it to be used as a transparent heat spreader inside the resonator of high-power thin-disk lasers, generating heat flow densities that cannot be handled with other materials.”

The project collaborators are working on two high-average power thin-disk laser systems. One is an amplifier system using chirped pulses to obtain high-energy pulses; the second a high-power oscillator to achieve high repetition rates. “Both will have a maximum average output power of at least 200 W at a pulse duration of well below 100 femtoseconds,” they predict.

That kind of performance should challenge the most powerful picosecond-pulsed ultrafast lasers currently used by industry and sold by the likes of Coherent and Newport’s Spectra-Physics division for applications such as micromachining transparent materials and ceramics.

Element Six says that it will further develop the single crystal chemical vapor deposition (CVD) diamond so that it can be mounted to the Ti: sapphire crystal, improving its thermo-optical effects so that it can be pumped at the requisite higher powers.

“While Element Six's CVD diamond already has a thermal conductivity of up to 2200 W/mK as well as low birefringence and absorption rate, for this laser system application to be successful, further reductions in absorption coefficient of the CVD diamond and an increase in available area will be needed,” explains the firm.

Cutting and drilling demonstrations
It also makes diamond optics designed for extreme ultraviolet (EUV) lithography systems, while the material has featured in tunable Raman lasers developed at the University of Strathclyde.

“To date, our CVD diamond material has been leveraged for a range of commercial solid-state laser systems with great success demonstrating unparalleled levels of heat extraction – enabling laser systems to operate at higher powers with improved beam quality," said Adrian Wilson, director of the technologies group at the firm.

To achieve the targeted output powers, the thin-disk crystals will be cooled by two diamond heat-spreaders. The multi-pass amplifier configuration will be pumped by two nanosecond-pulsed, frequency-doubled lasers operating at 532 nm with an average output power of 300 W each.

The high-repetition-rate system will use a commercial Yb:YAG thin-disk laser as its source, with intracavity frequency doubling to produce around 500 W output at 515 nm, and should deliver a pulse energy of 20 µJ at 10 MHz.