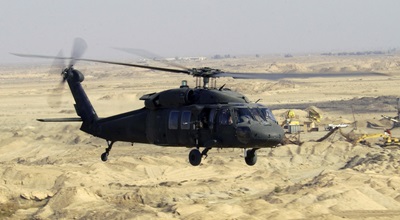 Defense contractor Northrop Grumman says that its latest common infrared countermeasures (CIRCM) system – which is based around quantum cascade lasers (QCLs) developed by partner Daylight Solutions – has successful completed US Army testing on board a UH-60M Black Hawk helicopter.

The latest flight tests were conducted at Redstone Arsenal in Huntsville, Alabama, and subjected the lightweight CIRCM system to “rigorous conditions” over a six-week period.

Northrop Grumman said in a statement that the system successfully completed the entire government-designed test plan, showing its effectiveness under intense aircraft environments including turns and banks, gunfire, flares, clutter, multiple shots, rotor blades and engine exhaust. The CIRCM system is also said to have demonstrated its performance capabilities against captive missile seekers.

The latest round of tests comes a year after the QCL-based system completed flight safety tests with the US Army, and represents another milestone for the mid-infrared laser technology developed by San Diego-based Daylight.

Handling complex scenarios
Jeff Palombo, the VP and general manager of Northrop Grumman’s land and self-protection systems division, said: “This flight test performance correlated extremely well with the results of our lab testing demonstration to show the maturity of our algorithms and software, which is something that many new programs can struggle with.”

He added: “Drawing upon more than 1 million hours of laser-based directional infrared countermeasure system operation in theatre, plus 1,000 hours of instrumented CIRCM tests, allowed us to successfully handle the complex scenarios encountered during the flight testing phase of this program.”

Because it uses semiconductor lasers rather than conventional infrared sources, the Northrop Grumman CIRCM system is much smaller and lighter than earlier technologies, and so it can be used to protect a much larger range of aircraft from threats like “MANPAD” heat-seeking missile attacks.

Northrop, which also works with Finmeccanica-owned Selex ES on the technology, highlights its open architecture approach, designed to integrate and operate with both legacy and emerging missile warning systems, as an advantage.

So far, Northrop Grumman's more conventional infrared countermeasures have been installed on more than 850 aircraft including 55 different aircraft types.

• In July, Daylight received a small business innovation research (SBIR) grant from the US Army to work on the development of an ultraviolet laser for potential defense applications including lidar and biomolecule detection.