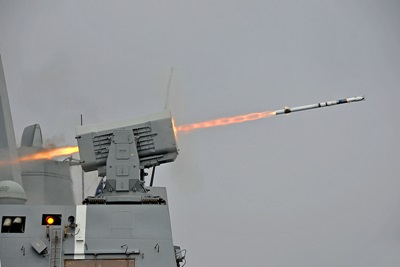 Michigan-based Advanced Photonix (API) says it has landed a contract worth approximately $1.6 million from a leading defense contractor to provide a custom photodiode for the US Navy.

The component is needed for the latest version of the Navy's guided missile weapon system, and the work should be completed within 18 months if all goes according to plan.

The missile system, described as “the world's most modern ship self-defense weapon” is designed to destroy anti-ship missiles and is based around an autonomous, dual-mode guidance technique using passive radio frequency and infrared photonics.

According to API the guidance design requires no shipboard support following the launch of the missile, meaning that it can be used to engage multiple threats simultaneously.

Richard Kurtz, API's CEO, said: "This vital missile program has been one of the Navy's most reliable missile guided systems. [It] is an ongoing program which we have been fortunate to have for the past 15 years and [we] expect this program to continue into the future.”

In the dual-mode design, a detector is needed on the missile's proximity sensor. Because the missile rotates like a rifle bullet, the system needs four detectors mounted orthogonally so that there is always a detector sensing for proximity.

The proximity sensor ensures that even if the incoming missile is not struck head-on, the Navy’s weapon will detonate as it passes by to destroy it anyway.

Sales up as API raises cash
Known more formally as the “RIM-116” rolling airframe missile (RAM), the system was developed through a collaboration between the US and German governments.

API’s new contract is for the latest “Block 2” (RIM-116C) configuration, which is currently in low-rate initial production and undergoing developmental and operational tests.

The Ann Arbor company says that in its most recent fiscal year military and aerospace customers accounted for just under 10 per cent of its total revenue of $29 million. “API anticipates that this contract, along with the absence of government sequestration this fiscal year, will result in greater revenue from these customers,” it said.

API also sells into metrology and medical markets, for applications ranging from currency validation to retina eye diagnostics, and is developing terahertz technology for non-destructive testing and process control.

Last month, the firm reported a rise in quarterly revenues to $7.7 million, thanks largely to sales of its high-speed optical receiver platform. Kurtz added that API's terahertz technology was "beginning to show traction", and said that overall revenues should grow by 20 per cent in the current fiscal year.

However, the company still posted a net loss of nearly $1 million in the latest financial quarter. To bolster its balance sheet, API recently raised $2.9 million in cash thanks to a stock placement underwritten by B Riley and Co.

Its investors include In-Q-Tel - venture capital wing of the US Central Intelligence Agency (CIA).