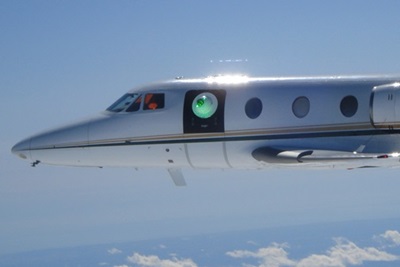 US defense contractor Lockheed Martin says that it has demonstrated the airworthiness of a new beam control turret designed for use with a future laser weapon, following a series of flight tests.

The development is the result of a partnership with the Air Force Research Laboratory (AFRL) and the University of Notre Dame, and backed by the Defense Advanced Research Projects Agency (DARPA).

The intention is to build a turret that gives 360-degree coverage for future high-energy laser weapons operating on board military aircraft.

Although much of the early work on laser weapons took place aboard the now-retired Airborne Laser – a Boeing 747 kitted out with a powerful but bulky, complex, toxic and unreliable chemical laser – more recent developments have seen a migration to solid-state lasers designed for truck-mounted and maritime applications.

Turret turbulence
Deploying a laser weapon on board a military aircraft presents additional challenges in terms of size, weight and power consumption, as well as the complexity of engaging enemy targets at much higher relative velocities than on the ground or at sea and the impact of a turret on a plane's performance.

“These initial flight tests validate the performance of our ABC turret design, which is an enabler for integrating high energy lasers on military aircraft.”

That turret system is designed to allow high-energy lasers to engage enemy aircraft and missiles above, below and behind, with Lockheed Martin’s flow control and optical compensation technologies designed to counteract the effects of turbulence caused by the protrusion of a turret from the plane’s fuselage.

All turret components met US Air Force and Federal Aviation Administration airworthiness requirements, Lockheed said. It added that further flight tests over the coming year will demonstrate the turret in increasingly complex operations.