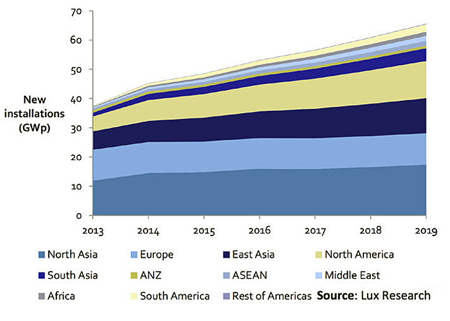 Growth of solar power installations may be restrained, says analyst.

Led by China, the solar industry will grow at a CAGR of 8.3% – from 37.5 GWp (gigawatt peak) in 2013 to 65.6 GWp in 2019 – but emerging trade disputes involving the Asian giant, as much as global policies, cast a shadow over short-term prospects, according to market analyst Lux Research.

China became the biggest solar market in the world with installations delivering 11.8 GWp in 2013, and has been key to faster-than-expected global recovery. Since the competitive bankruptcy-ridden cost environment of 2012, module supplier margins have increased, with most Tier-1 suppliers topping 10% toward the end of 2013 and 15% in the first quarter of 2014.

"With solar now fairly common in most parts of the world, it reaps the rewards of direct incentives but also faces uncertainty due to pressure on trade activity with China," said Matthew Feinstein, Lux Research Senior Analyst and the lead author of the report titled Solar Market Size Update 2014: Reform for the Long Haul. “Furthermore, as an increasingly commonplace electricity source, most major markets are dealing with some combination of these dynamics, complicating the status of policy globally," he added.

Lux Research analysts evaluated the growth trajectory of the solar industry, besides weighing policy and other challenges. Among their findings:

Cost cuts will be sustained. With cost cuts critical to the sustained growth of the industry, incremental increases in efficiency are on course from technologies such as passivated emitter rear contact (PERC), heterojunction with intrinsic layer (HIT) and selective emitter (SE). System costs will drop by between $0.36/Wp for utility-scale and $0.60/Wp for residential by 2019. This will translate to a 20% cut in total system costs.

X-Si remains technology of choice. Crystalline silicon (x-Si) will dominate the solar market through 2019 even though other module technologies such as copper iridium gallium diselenide (CIGS), copper zinc tinc sulfide (CZTS), cadmium telluride (CdTe) and thin, flexible, epitaxial silicon (epi-Si) have the potential to become major threats in the future. X-Si, with an 84.6% market share, will grow from 31.6 GWp in 2013 to 55.7 GWp in 2019, growing at a CAGR of 8.45%. CdTe and CIGS will be a distant second -- growing to 4.8 GWp and 4.2 GWp, respectively, in 2019.