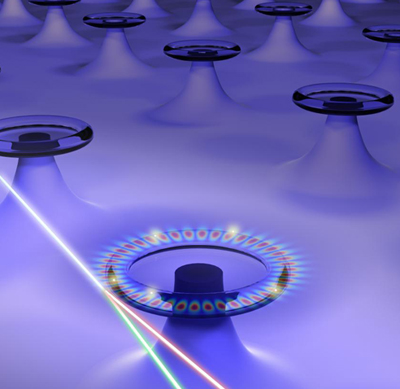 Researchers at Washington University in St. Louis, MO, USA, and their collaborators at Tsinghua University, Beijing, China, have developed a novel sensor that can detect and count nanoparticles, at sizes as small as 10nm -- one at a time. The researchers say the sensor could potentially detect much smaller particles, viruses and small molecules. The work was published in the Proceedings of the National Academy of Sciences online Early Edition on September 1.

Project leader Lan Yang, the Das Family Career Development Associate Professor in Electrical & Systems Engineering, and her colleagues have created the Raman microlaser sensor in a silicon dioxide chip to find individual nanoparticles without the need to "dope" the chip with chemicals called rare-earth ions to provide optical gain for the microlaser.

In certain conventional sensors, incorporating additions to the microresonator requires more processing steps, increases costs and can cause biocompatibility risks. In addition, the use of rare-earth ions requires specific pump lasers matching the energy transitions of the ions to generate optical gain, so for different rare-earth ions, different pump lasers must be used. Yang commented, “Using the Raman process loosens the requirement of specific wavelength bands for pump lasers because Raman gain can be obtained using pump at any wavelength band.”

Sahin Kaya Ozdemir, a research scientist in Yang's group and lead author of the paper, added, "Our approach gives us the advantage of using the same dopant-free sensor in different sensing environments by tailoring the lasing frequency to the specific environment, for example, at the band where the environment has minimum absorption, and for the properties of the targeted nanoparticles by just changing the wavelength of the pump laser."

Yang's team integrated Raman lasing in a silica microcavity with the mode-splitting technique pioneered by her group to develop a new, powerful sensor that more readily detects nanoparticles. The technology is expected to benefit the electronics, acoustics, biomedical, plasmonics, security and metamaterials fields. 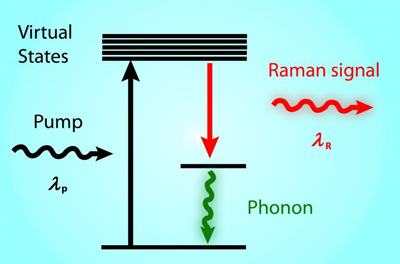 Yang's microsensor is in a class called whispering gallery mode resonators (WGMRs) because it works similarly to the renowned whispering gallery in Saint Paul's Cathedral, London, where a person on one side of the dome can hear a message spoken to the wall by another person on the other side. Yang's device does much the same thing with light frequencies rather than audible ones.

When a Raman laser beam is generated in the resonator, it likely will encounter a particle, such as a virus nanoparticle, on the circle. When the beam initially sees the particle, the beam splits into two, generating two lasing lines that serve as reference to the other to form a self-referenced sensing technique.

"Our new sensor differs from the earlier whispering gallery sensors in that it relies on Raman gain, which is inherent in silica, thereby eliminating the need for doping the microcavity with gain media, such as rare-earth ions or optical dyes, to boost detection capability," Ozdemir said. "This new sensor retains the biocompatibility of silica and could find widespread use for sensing in biological media."

In addition to the demonstration of Raman microlasers for particle sensing, the team says their work shows the possibility of using intrinsic gain mechanisms, such as Raman and parametric gain, instead of optical dyes, rare-earth ions or quantum dots, for loss compensation in optical and plasmonic systems where dissipation hinders progress and limits applications.