Earnings pushed back but the PV giant points to strong bookings and a new CdTe cell efficiency record.

Thin-film photovoltaics giant First Solar has posted a sharp decline in sales and net income for its latest financial quarter, although the Tempe, Arizona, company is confident that the result simply reflects the timing of certain projects rather than anything more fundamental.

For the three months that ended June 30, the maker of cadmium telluride (CdTe) panels reported a 43 per cent sequential decline in sales, which came in at $544 million. Net income of $4.5 million was also down sharply from $113 million last time.

However, the company attributed the slump in figures to a combination of its earlier recognition of the 139 MW Campo Verde project in California, as well as delays to revenues relating to other large solar farms until later this year.

“While project delays in Q2 resulted in deferring some earnings to later in the year we remain on track to meet our financial targets for the year,” said First Solar CEO Jim Hughes in a statement, though in an investor call he preferred to flag up the latest efforts by the company’s researchers – a new record-breaking thin-film cell – and new bookings for more than 800 MW (DC) of PV power.

Confirmed by the US National Renewable Energy Laboratory (NREL) as having a 21 per cent conversion efficiency, the latest small-area CdTe cell is a significant improvement on the previous best of 20.4 per cent – set by the same team earlier this year.

"We stated at our recent analyst day that our target research cell efficiency by the end of 2015 is 22 per cent, and this new record puts us well on our way to meeting this goal," Hughes told investors. 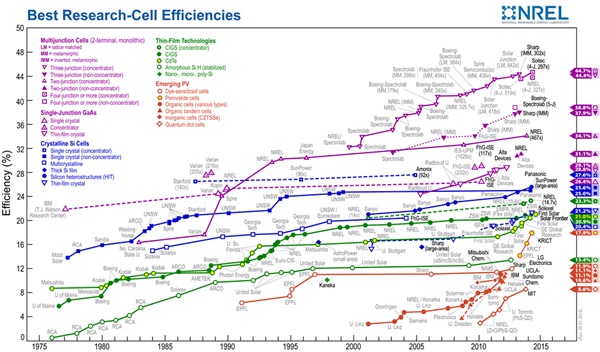 Scalable technology
While First Solar believes that its record-breaking CdTe cells can be industrialized, it remains to be seen whether the figures can be reproduced in full-scale designs and on a volume scale. For comparison, in the latest quarter the average conversion efficiency of CdTe modules produced by First Solar was 14 per cent - itself a sharp increase from 13.5 per cent in the prior quarter.

"We have just begun to reveal the true unrealized potential of CdTe PV," said Raffi Garabedian, First Solar's CTO, in a company statement, stressing that the team was working on practical devices capable of commercial scale production.

“Not only have we have now demonstrated the highest [efficiency] single-junction thin-film cell on record, but just as important, our record cells are based on the same scalable manufacturing processes and commodity materials that we have proven through years of volume production," he added.

The new result also narrows the gap between CdTe and First Solar's own high-performance silicon cell technology, acquired via TetraSun last year. The progress on CdTe efficiency will have taken some pressure off the need to scale up TetraSun cells to volume production quickly, although First Solar indicated that it still sees an opportunity for the technology in rooftop and other space-constrained applications.

A glance at the latest NREL chart of record-breaking research-level solar cell performances (see above) backs up First Solar’s claims that it is improving CdTe technology at a rapid rate. For a full decade between 2001 and 2011 the record was represented by NREL’s own device at around 17 per cent efficiency. But since 2011 that figure has increased sharply, thanks to a combination of GE Global Research and First Solar.

Markus Gloeckler, First Solar’s VP for Advanced Research, said: "Our significant investment in development of CdTe thin-film technology has enabled a rapid rate of improvement and gives us tremendous confidence in the future. We have made outstanding improvements in all aspects of our thin-film solar cells and are aggressively pursuing the commercialization of these advanced technologies in our product."

One of the most notable aspects of NREL’s latest chart is the rapid emergence of perovskite as a potential PV material of the future. Earlier this year, a perovskite cell made by a team at the Korean Research Institute of Chemical Technology was verified at 17.9 per cent efficiency.