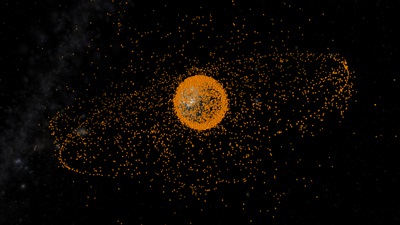 US defense contractor Lockheed Martin is collaborating with the Australian company Electro Optic Systems (EOS) on a new site for tracking space debris – just months before the first laser-based debris trackers are due to begin providing data to customers.

The new tracking site, in a remote part of Western Australia, will use a combination of lasers and optical sensors to detect, track and characterize man-made debris in orbit and posing a potential threat to an estimated $500 billion worth of vulnerable space hardware already launched.

According to the two firms the new system, which should be ready by early 2016, will paint a more detailed picture of space debris for both government and commercial customers.

Earlier versions of the EOS trackers have used a nanosecond-pulse, 50-100 W average power Nd:YAG laser, delivered via a 1.8 meter telescope.

"Ground-based space situational awareness is a growing priority for government and commercial organizations around the world that need to protect their investments in space," said Rick Ambrose, executive VP at Lockheed’s space systems division. "Through this agreement with EOS, we'll offer customers a clearer picture of the objects that could endanger their satellites, and do so with great precision and cost-effectiveness."

Tracking costs fall 90%
News of the collaboration comes shortly after EOS said that it had made excellent progress in cutting the cost of the debris-tracking technology. On August 5, the company issued a statement to the Australian Stock Exchange saying:

“Breakthroughs were achieved in [technology] areas from early 2014, and over the past 90 days these key developments have been reconfirmed and are now ready for operational use. EOS sensors can now cost-effectively meet commercial demand for space debris data and collision mitigation services.”

EOS said that the cost of generating an equivalent amount of tracking data has fallen by 90 per cent over the past decade, following investments by both the company itself and more than $18 million from its customers.

“EOS Space will begin commercial deployment of its advanced space tracking systems later this year, with operation of a significantly expanded capability expected to commence by 2016,” it added.

Because of the unstable nature of the orbits and trajectories of debris, tracking information must be updated daily to minimize the risk of collisions between satellites and debris.

However, the barriers to entry for such tracking systems are high. That is because of the need to generate better accuracy, greater global coverage and higher data density than has previously been possible.

Lockheed and EOS are already partners in a AUS$60 million project partly backed by the Australian government through its Co-operative Research Centre (CRC) focused on space environment management. Australian telecoms company Optus, which has several satellites in operation and is due to launch another in early September, is also collaborating in the CRC project to develop the next generation of debris-tracking technology.

According to EOS, it is now “very likely” that the CRC will be fully funded and operational by September 30.

Data value and cost curves “crossed”
The company also says that recent announcements of new space debris management initiatives from three countries all conform to the EOS collaboration model, with two of them already implementing a formal relationship with the company.

It now has a claimed AUS$17 million order backlog for sensor components from selected foreign entities, and this figure should increase soon.

“Data value and cost curves have now crossed and commercial space operations are now viable for EOS,” said the firm.

Development of the new tracking site in Western Australia is set to commence in late 2014 and once operational it is expected to roughly double EOS’ current capability to meet customer data requirements. However, EOS says that its business model supports considerably more investment, which EOS cannot make immediately with only its own resources.

EOS’ chief executive Ben Greene, who is also heading up the CRC collaboration, said of the Lockheed agreement: "The partnership will help both organizations establish a global network of space sensors, while simultaneously increasing the market reach of the partners' data and services."

“We consider the strategic partnership with Lockheed Martin a major step towards the achievement of critical mass of sensors, data and services, all of which are critical in providing detailed yet easily usable information on space debris.”

On completion, the new site should provide a space debris tracking capacity equal to a quarter of all capacity currently accessible to the global space industry, coupled with better accuracy.

"Further expansion of the partnership's tracking capacity through additional sensors and the establishment of new sites is also under consideration," Greene added.