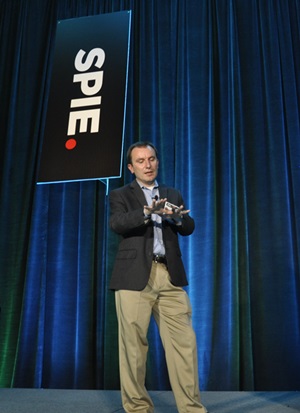 by Ford Burkhart in San Diego
After a long and frustrating road, the hopes of using laser inertial confinement fusion (ICF) to produce clean, practical nuclear energy from a pea-sized fuel pellet have improved sharply - according to Mike Dunne, director of laser fusion energy at the National Ignition Facility’s mammoth site at Lawrence Livermore National Laboratory in California.

“We have made truly spectacular advances in last 12 months,” Dunne said during his opening plenary talk at the SPIE Optics and Photonics 2014 conference in San Diego.

“We are learning how to use the world’s largest laser system to induce fusion in the lab,” he said. “We are now at a point for the first time where every time, more energy comes out than is absorbed by the fuel. But we still have a long way to go.”

For the past year, the energy coming out of the giant laser system has been more than twice the energy absorbed, Dunne said. “We are a factor of two away from the ratio we need,” he added. “Consider that we were a factor of one hundred away just a few years ago and, you can see, this is just incredible.”

How long might it take to make the next step? “That can’t be answered,” he told a standing-room-only audience of at the San Diego Convention Center.

Challenges remain
But if and when that breakthrough comes, Dunne believes that it will be a relatively short time before real power plants based on the NIF technique could be put into operation. “It could be as short as eight years,” he said. Critical to making that happen will be finding a reliable way to deliver the colossal laser pulses to the pellet at a rate of 10 Hz or more to maintain the fusion reaction and its production of useful energy.

When NIF’s 192 high-energy lasers are fired at a tiny fuel pellet, the target implodes in an instant and creates a self-sustaining fusion reaction - in effect, a miniature hydrogen bomb.

One problem is that the plastic “skin” of the pellet gets mixed with the fuel. “That’s like pouring water on a fire as you want to light it,” Dunne said. “The goal is to do all this with all absolutely clean implosions.”

He admits that there is still much to be learnt in terms of finding the best materials for coating the fuel pellet, and invited proposals “from anywhere in the world” to help solve the remaining challenges.

“If you have any good ideas, we would be willing to talk,” said Dunne, who is a former director of the UK’s Central Laser Facility, and was international project leader for the “HiPER” laser fusion project in Europe. “If you buy me a beer, I will talk even longer.”

Last year, the NIF team reported record neutron yields following a change to the laser pulse shape used to compress the fuel pellet, and followed that up in early 2014 with their first report of fusion with fuel gain greater than unity.

But the ultimate goal of the NIF experiments - ignition - is yet to be achieved. In late 2012 the facility's priorities were switched towards nuclear stockpile stewardship and other scientific studies rather than the earlier campaign to demonstrate ignition, although the lab's figures for target shot metrics suggest that ICF experiments still account for a large proportion of the total.