by Ford Burkhart in San Diego
So far, any predictions of the demise of silicon’s dominance in the photovoltaics industry have been proved wrong. Silicon-based cells still feature in around 90 per cent of all PV modules and solar panels – with the remaining tenth of the market largely attributable to First Solar’s cadmium telluride (CdTe) technology.

But talk of rapid progress in CdTe conversion efficiency, and hopes for new organic materials, next-generation “hot-carrier” devices and even the embattled concentrating PV (CPV) sector dominated a plenary session on the future of solar energy generation at SPIE’s Optics and Photonics 2014 sympsoium in San Diego.

Batting for CdTe – by far the most advanced of those alternatives in terms of commercial deployments - was William H. Huber from the GE Global Research effort that was acquired by First Solar almost exactly a year ago. Huber leads the “efficiency improvement program” at the company, and recent results have given him great confidence in CdTe’s future prospects.

“It’s far more efficient than was thought possible,” he told delegates, indicating that the recent laboratory benchmark of 21 per cent held much promise for scaling up to production sizes and volume manufacturing.

CdTe “re-awakening”
In the 12 months during which GE and First Solar, long the dominant forces in CdTe-based PV modules, have been working together, there has been more rapid progress in cell efficiencies (albeit at the laboratory scale) than had been witnessed over much of the prior decade.

Although it was eventually forced to abort plans to build its own volume manufacturing facility near Denver, GE decided to enter the business at a time when the best CdTe cell effciencies were way lower than silicon. Since then, it has improved cell performance in all of its major parameters, Huber said, helping create what he described as the current “reawakening” of CdTe.

“It has exploded in a few years,” Huber said, “and the story is by no means over at this point.” He added that First Solar expects to be manufacturing CdTe modules with a conversion efficiency of 19.5 per cent by 2017 – comparing with the company’s latest production average of 14 per cent during the second quarter of 2014.

“Cadmium telluride has not run its course,” Huber said. 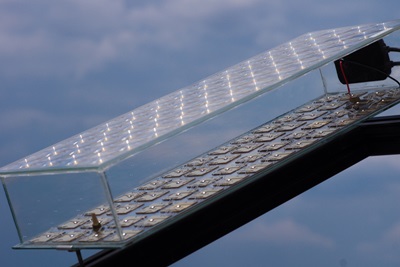 CPV hopes
In the world of CPV, the past couple of years have been painful, with the collapse in the price of silicon-based modules eventually spelling doom for the likes of the heavily-backed SolFocus, as well as GreenVolts and Soliant, while JDSU ditched its multi-junction cell development efforts not long after acquiring Quantasol’s intellectual property.

Even the CPV industry’s biggest hitters – California’s Amonix and the Fraunhofer spin-out Soitec Solar – have been unable to avoid the fall-out, with Amonix dropping plans for a volume manufacturing facility in Nevada before morphing into new entity ArzonSolar a couple of months ago. Meanwhile the Soitec division remains dependent on the deep pockets of its parent company to stay afloat.

But for Adam Plesniak, VP of engineering at the new ArzonSolar, the future for CPV is still bright. He said that the technology has so far been installed in about 200 MW worth of sites worldwide (for comparison, various estimates put the figure for total cumulative global installed PV north of 150 GW presently). “We expect about 100 MW a year in the years ahead,” he predicted. “We’re getting there.”

“Ferrari” re-started
“CPV is essentially the high-performance, high-efficiency alternative. It’s the Ferrari of solar,” said Plesniak, whose company – under the leadership of Amonix founder Vahan Garboushian - has inherited the Amonix know-how developed since way back in 1989.

“It is about high energy output; but it’s not that much more expensive. You may pay more up front, but for very sunny, hot places, like Las Vegas or Tucson, CPV is essentially the way to get the most bang for your buck.”

That has always been the sales pitch for CPV, but hopes for the sector were dealt another blow just this week as Australia’s Solar Systems, a subsidiary of Silex Systems, was forced to suspend plans for a 100 MW domestic project that would have become the world’s largest CPV power plant. For now, that title remains with Amonix's 30 MW Alamosa site in Colorado.

Plesniak admits that CPV is essentially 20 years of development behind silicon and CdTe, but remains hopeful that it is emerging as the way to maximize output for input cost. In the years ahead, he predicted: “You are going to see a lot of CPV product going in the ground. New markets will emerge where CPV is the right choice.”

The engineering VP added that ArzonSolar is adapting its strategy, so that CPV can become more widely accessible. “You don’t have to be a power company to be interested,” he said. 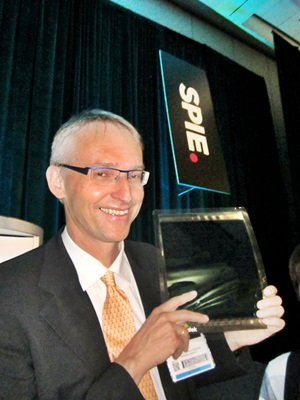 Organic progress?
Karl Leo, a faculty member at the Technische Universitat Dresden – a hugely influential force in the field of organic electronics – showed off a notebook-sized sheet of 1 mm-thick transparent green plastic during his plenary address at the San Diego Convention Center. The flexible solar material could take the form of various architectural features, elements in auto design or other futuristic applications.

And while commercial products are not yet available, Leo said the efficiency of the best organic PV materials has leapt from 3 per cent to 12 per cent in just five years.

Products from Heliatek, the Germany-based company that was spun out of Leo’s Dresden research group (Leo was a co-founder) and the University of Ulm in 2006, should be available next year, he said.

Target applications include elements for building-integrated PV, for example sandwiching the organic films between two plates of glass in skyscraper windows. The flexible film might work as a roof in a new stadium, or even for tents, creating flexible solar panels.

While the panels can be made very cheaply, Leo said that some technical problems remain to be solved. “Much more complex research is needed,” he said. Like CPV, it seems, organic solar remains for now a technology still in search of a market.

“Third generation” cells: a ‘hot carrier’ primer
The various travails of CPV and organic solar have not dissuaded those looking even further in to the PV future, however. And while the so-called “third generation” of devices remain largely a matter of theory, Gavin Conibeer from the Australian Centre for Advanced Photovoltaics at the University of New South Wales gave a quick tour of the emerging scientific landscape.

Explaining the third generation as technology going beyond the “first generation” of mostly silicon wafers and the second wave of thin-film technologies (like CdTe), Conibeer said that it will combine first- and second-wave ideas using multiple stacked materials.

The resulting “hot carrier” cell sees those materials acting in tandem to deliver more efficient energy conversion – with the multi-junction cells already used in CPV systems one example of the approach.

“We are now trying to prove the concepts that will be the core of next-generation thinking,” he said. “When that happens depends on how much effort is put into it. The new technology can take off with enough investment.”

In a hot carrier, photons from sun arrive, heat up and then cool on a timescale of just picoseconds. “It is an incredibly short time,” Conibeer said. “It’s crucial because you can lose a lot of energy.”

The goal is to extract the energy before it turns into that extra heat, he explained. “Ideally it should all operate at room temperature, turning the sunlight into electricity. Electricity would come from, say, 85 percent of it, as the other 15 percent gets reflected. I am optimistic about it.”

Such thinking is the key to all third-generation approaches, but Gonibeer admits that the cutting edge of solar cell research remains a very tough nut to crack: “We have some very promising approaches and very promising materials,” he said. “The problem is, it is difficult to optimize all the variables at the same time.”